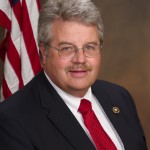 ALLISON – Tim Junker of Allison, Iowa has announced that he will challenge Amanda Ragan in 2014 for the Iowa Senate Seat for District 27, which serves potions of Butler County, Franklin County and Cerro Gordo County.  Ragan is serving her third term in Des Moines.

Mr. Junker will be running on the Republican ticket.  He graduated from Parkersburg High School enlisted in the US Army was Honorably Discharged. In 1977, Junker started working for the Butler County Sheriff’s Office as a Deputy Sheriff. In 1984 Junker was elected as Sheriff of Butler County. Junker was elected for six terms as Butler County Sheriff until 2006 when he was appointed as the US Marshal for the Northern District of Iowa by President Bush. Junker served in that position until 2010. Since then, Junker has been selling real estate for Schuck Realty Company and has served on the Allison City Council. Allison Tree Board, is an active member of Trinity Reformed Church, Allison Am Vets and the Am Vets/Legion Drill Team.