This news story was published on December 14, 2013.
Advertise on NIT • Subscribe to NIT 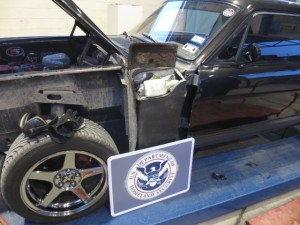 The vehicle was dismantled and specially constructed compartments were discovered under the front fenders of the car.

El Paso, Texas – U.S. Customs and Border Protection officers working at the El Paso port of entry found 78 pounds of marijuana hidden in the side panels of a 1966 Ford Mustang this weekend. It was one of eight drug seizures made by area CBP officers this weekend. The combined weight of the seizures was 516 pounds.

“Smugglers will conceal their contraband in almost any make or model of car that has ever rolled off the assembly line,” said CBP El Paso Port Director Hector Mancha. “It is a bit unusual to see drugs in a collectable or high value car. Nevertheless the drugs and the vehicle are now in CBP custody and the driver behind bars facing charges.”

The seizure was made just before 5 a.m. Saturday at the Paso Del Norte international crossing when a black 1966 Ford Mustang entered the port from Mexico. A CBP officer selected the vehicle for a secondary exam following his initial entry interview with the driver. CBP officers scanned the car with the Z-Portal x-ray system and spotted anomalies in both front quarter panels. CBP drug sniffing dog “Chip” searched the car and alerted to the front fenders.

The vehicle was dismantled and specially constructed compartments were discovered under the front fenders of the car. The compartments contained a total of 68 plastic-wrapped bundles. The contents of the bundles tested positive for marijuana.

CBP officers arrested the driver, 29-year-old Edgar Acosta of El Paso, Texas. He was turned over to U.S. Immigration and Customs Enforcement Special Agents to face charges in connection with the failed drug smuggling attempt.