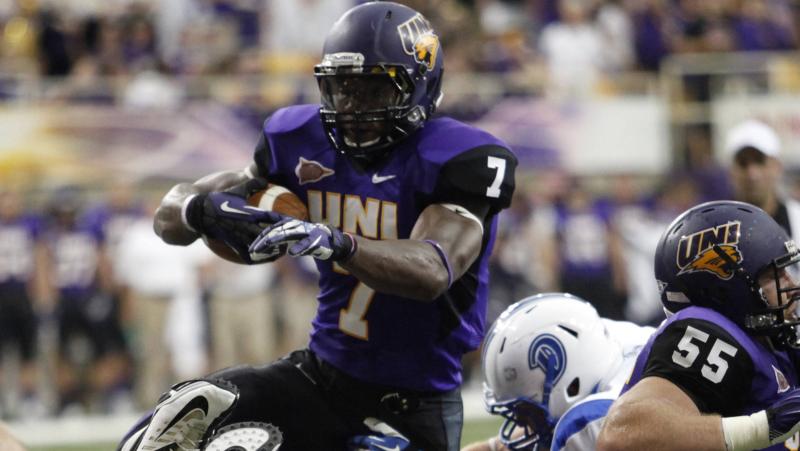 FARGO, N.D. – The No. 4 University of Northern Iowa football team fell to the No. 1 North Dakota State Bison, 24-23, suffering its first loss of the season. The Panthers are now 4-1 overall this season.

The Panthers led the Bison until the last three minutes when Sam Ojuri found his way into the end zone with 2:52 left in the game off a 19-yard rush. The drive took 4:05 off the clock for eight plays and 76 yards, giving NDSU the win.

For the second game in a row, the Panther special teams unit opened the game with a huge play. Zach Cutkomp forced a fumble off Bison kickoff returner Marcus Williams and Blake White came up with the recovery to give UNI the first offensive possession of the game.

The play set up the Panthers first points of the game when Tyler Sievertsen knocked in a 37-yard field goal to put UNI up 3-0 with 13:24 left in the first quarter. The drive took 1:28 off the clock for four plays and two yards.

With 5:20 left in the first quarter, Sievertsen put a 50-yard field goal through the posts for a new career-long distance. UNI took the 6-0 lead, taking 1:29 off the clock for seven plays and 44 yards.

To open the second quarter, Johnson broke several tackles and took off on an 85-yard rush to give UNI its first touchdown of the game. His career-long rush put the Panthers up 13-0, taking 13 seconds off the clock for one play.

North Dakota State jumped on the scoreboard with 5:22 left in the second quarter making the score 13-7. Bison quarterback Brock Jensen found Carey Woods in the end zone for a 23-yard pass, burning 2:28 off the clock for six plays and 54 yards.

Quarterback Sawyer Kollmorgen finished the first half 7-17 for 71 yards. Johnson notched 96 yards rushing, leading the Panther ground attack while Kevin Vereen Jr. led the UNI receiving corps with two catches for 40 yards. On the defensive side of the ball, Tim Kilfoy led the team with six tackles and Collin Albrecht notched two sacks in the half.

The Bison notched a 28-yard field goal from Adam Keller to open scoring in the second half with 7:32 left in the third quarter. The drive took 5:49 off the clock for 44 yards and 12 plays, cutting the UNI lead to 13-10.

The Panthers answered with 4:45 left in the third quarter when Vereen Jr. came down with a huge catch in the end zone for a three-yard reception. After 2:42, eight plays and 71 yards, the Panthers took a 20-19 lead.

After the Panther kickoff, Jalen Barnes forced a fumble on returner Christian Dudzik with Jordan Webb coming up with the recovery. The play set Sievertsen up for his third field goal of the game, sending in a 36-yarder to put UNI up 23-10. The drive took 1:10 off the clock for four plays and six yards.

NDSU ended the game with its final touchdown in the last three minutes of the game to grab the win.