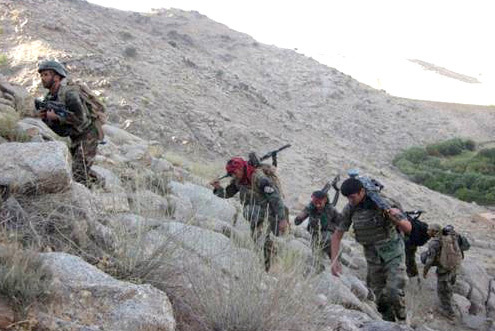 The elite Afghan soldiers were clearing the Mirza Kalay village when they were ambushed by the Taliban force. The 3rd SOK soldiers endured a 12-hour gun battle, fending off shoulder-fired rockets, small arms weapons and machine gun fire.

Taliban fighters employed a variety of tactics from several positions in an attempt to thwart the 3rd SOK soldiers’ operation. The elite Afghan force, however, repelled each Taliban try, ultimately forcing their retreat.

The 3rd SOK’s success in this operation is not only attributed to their fighting skills, but their ability to gather and refine intelligence. Such increased capabilities greatly contribute to operations planning, making them well prepared to face enemy threats.

Independent operations, such as this, are also more common among Afghan special operations forces. Afghan special forces and commandos consistently engage insurgent forces in austere regions of the country to expand their security footprint as U.S. and NATO forces retrograde from remote outposts.

There were no Afghan military or civilian casualties reported from this operation.

Mohammad is expected to make a public address within the next few days on the successes of his kandak over the past few weeks.