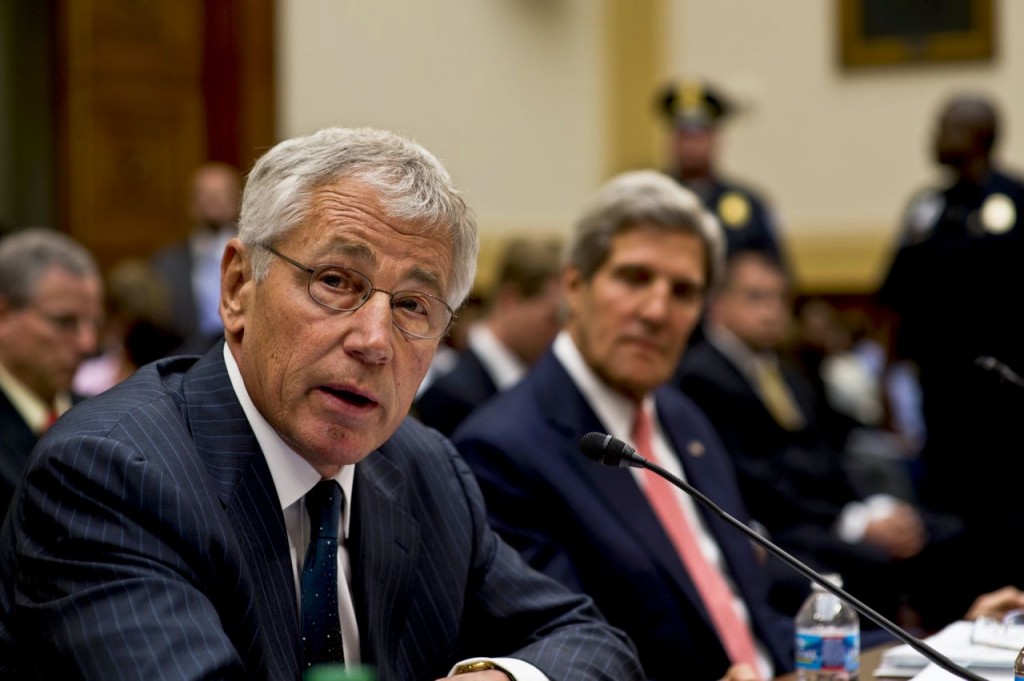 WASHINGTON – Secretary of State John F. Kerry and Defense Secretary Chuck Hagel Wednesday urged the House Foreign Affairs Committee to support President Barack Obama’s plan to respond to the Syrian regime’s use of chemical weapons against its own people.

Joined by Army Gen. Martin E. Dempsey, chairman of the Joint Chiefs of Staff, the two Cabinet officials explained the president’s position, as they did yesterday at the Senate Foreign Relations Committee.

Hagel acknowledged the gravity of the issue, describing the U.S. commitment to the use of force as “the most difficult and important decision America’s leaders can make.”

“The Department of Defense – our leaders — have spent days and days going over every option, every contingency,” he said.

The primary responsibility, he emphasized, is to ask the “tough questions” before making any military commitment. “The American people must be assured that their leaders are acting according to U.S. national interests with well-defined military objectives and with an understanding of the risks and consequences involved.”

Hagel said he shares Obama’s sentiment that the use of chemical weapons in Syria is not only “an assault on humanity” but a serious threat to America’s national security interests and allies.

The Syrian regime’s use of chemical weapons poses grave risks to U.S. friends and partners along Syria’s borders, including Israel, Jordan, Turkey, Lebanon and Iraq, the defense secretary said.

“If Assad is prepared to use chemical weapons against his own people, we have to be concerned that terrorists groups like Hezbollah, which has forces fighting in Syria supporting the Assad regime, could acquire them and use them,” he said, adding that the risk of chemical proliferation also creates a direct threat to U.S. personnel in the region.

“We cannot afford for Hezbollah or any terrorist group determined to strike the United States to have incentives to acquire or use these chemical weapons,” Hagel said.

An emboldened Syrian regime, Hagel explained, portends possible erosion of the nearly century-old international norm against the use of chemical weapons, which has helped to protect U.S. forces and the homeland.

Weakening that norm could hearten other regimes to obtain or use chemical weapons, he said, citing North Korea’s massive stockpile that threatens the South Korea, a treaty ally, and the 28,000 U.S. troops stationed there.

“Our allies throughout the world must be assured that the United States will fulfill its security commitments,” Hagel said. “Given these threats to our national security, the United States must demonstrate through our actions that the use of chemical weapons is unacceptable.”

Key partners and allies such as France, Turkey, Saudi Arabia and the United Arab Emirates have pledge support for U.S. action in the region, he said.

Military objectives are not to put U.S. military “boots on the ground,” Hagel said, but involve actions tailored to respond to the use of chemical weapons.

“We have made clear that we are not seeking to resolve the underlying conflict in Syria through direct military force,” Hagel said. “A political solution created by the Syrian people is the only way to ultimately end the violence in Syria.”

Chemical weapons, Hagel warned, “make no distinction between combatants and innocent civilians and inflict the worst kind of indiscriminate suffering.”
U.S. forces will be ready to act when the president gives the orders, Hagel told the House panel.

“The word of the United States must mean something,” Hagel said. “It is vital currency in foreign relations and international and allied commitments.”
Kerry urged the representative to support the president’s plan.