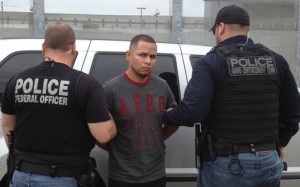 SAN DIEGO – A Mexican national, who fled to the United States to avoid prosecution for a murder three years ago in his native country, was turned over to Mexican authorities Monday following his recent capture in the Los Angeles area by U.S. Immigration and Customs Enforcement (ICE).

Mateo Perez Hernandez, 28, was remanded to the custody of representatives from the Mexican Attorney General’s Office by officers from ICE’s Enforcement and Removal Operations (ERO) at the San Ysidro border crossing Monday afternoon under tight security.

Perez is the subject of an arrest warrant issued by authorities in Mexico’s Baja peninsula charging him with the bludgeoning death of a Mexicali, Mexico, man in September 2010. Mexican authorities allege Perez struck the victim, Eduardo Fuentes, with a baseball bat after Fuentes and the suspect’s brother became embroiled in a heated argument in the street outside a party.

Department of Homeland Security databases show Perez had been previously deported from the United States in February 2010. ERO reinstated Perez’s prior removal order, paving the way for his repatriation to Mexico Monday.

“Violent criminals who seek to escape responsibility for their actions by fleeing to the U.S. will find no sanctuary in our communities,” said Gregory J. Archambeault, field office director for ERO San Diego. “As this case makes clear, ICE works closely with its international partners through its HSI Office of International Affairs to promote public safety and hold criminals accountable – no matter where they commit their crimes.”

Monday’s removal demonstrates the expanded bilateral cooperation to identify, arrest and repatriate Mexican fugitives who have fled to the United States to avoid prosecution. The ICE Attaché Office in Mexico City is working closely with the Mexican government as part of this effort. Many of those arrests involved homicide-related charges or other violent crimes.