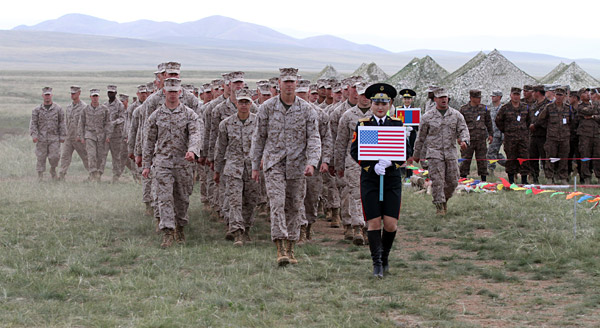 This year marks the 11th iteration of the annual exercise, which has played a part in training thousands of service members from around the world in peacekeeping and stability operations.

“Khaan Quest has become one of the signature training events for the participating nations,” said Lt. Gen. Ts. Byambajav, Chief of General Staff for the Mongolian Armed Forces. “At this moment we have more than 150,000 international peacekeeping troops performing their duties overseas … this is a result of the Khaan Quest exercises.”

Approximately 1,000 military personnel from 13 nations are taking part in both a platoon-level field training exercise, enhancing PKO skills for multinational troops on a tactical level, and a battalion-level command post exercise, which sharpens decision-making capabilities during peacekeeping operations by exercising scenario-based missions.

In addition to the FTX and CPX, service members are also conducting joint-combined engineering civic action program (ENCAP) projects, as well as cooperative health engagements and medical subject-matter expert exchanges in and around Ulaanbaatar.

Navy Adm. Samuel Locklear, commander of U.S. Pacific Command, joined the Honorable Ms. Piper Campbell, U.S. Ambassador to Mongolia, as part of the international delegation at the opening ceremony. He emphasized the importance of building interoperability between the participating nations.

“It’s all about moving forward together,” said Locklear. “So as we begin this very important exercise, I ask each and every one of you to foster the understanding and trust that the world will depend upon.”

Following remarks from Mongolian Prime Minister Norovyn Altankhuyag, platoons from Mongolia, Nepal, South Korea, Tajikistan and the U.S. conducted a pass-and-review, saluting the international delegation as they marched by, while Mongolian paratroopers slowly descended into a nearby field.

The ceremony concluded with a performance by MAF cavalry troops, displaying precision and riding expertise as they executed drill movements on horseback.

Despite mostly sunny skies, a light drizzle began to fall as U.S.-Mongolian military leadership toured the area after the ceremony. In Mongolia, Byambajav explained to Locklear that it is a sign of good luck when a visitor brings rain.

Judging from the way this year’s Khaan Quest exercise has started, it appears that luck might be on their side.

“As far as peacekeeping exercises go, this is one of the best in the world,” said Locklear. “And I’m sure it will only get better.”