U.S continues to prepare of “smaller footprint” in Afghanistan 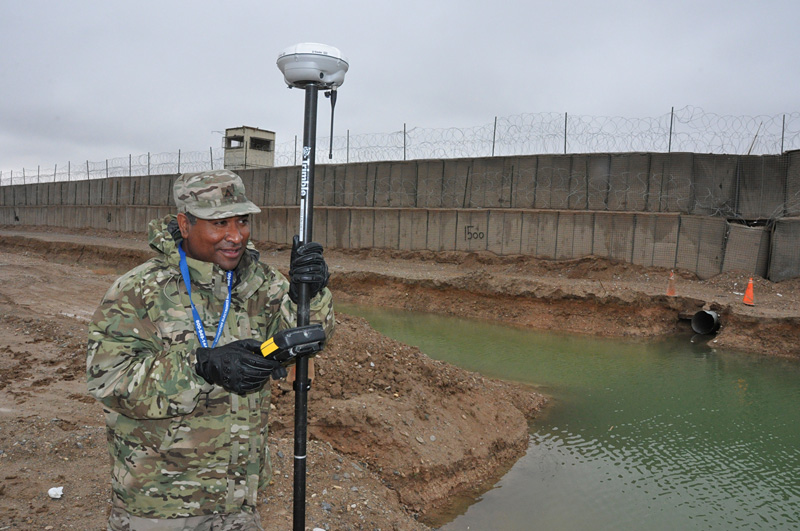 KANDAHAR AIRFIELD, Afghanistan – As responsibility for the safety, security and stability of Afghanistan is being assumed by Afghan authorities, the U.S. footprint here is getting smaller. As a result, United States Forces– Afghanistan, which is responsible for most of the base transitions and closures in the nation, looks to technical experts to assist with shutting down bases. One group of specialists helping to facilitate transitions and closures is the U.S. Army Corps of Engineers 553rd Engineer Detachment, Forward Engineer Support Team – Advance, based out of New York.

The team’s unique blend of engineering, environmental, geospatial and construction management professionals make them an apt choice for recommendations on how to expand, shrink, consolidate and close bases.

The 553rd is one of eight FEST-A teams in the world. Each is composed of one officer in charge, one non-commissioned officer in charge and six highly-skilled USACE civilian technical experts. The teams quickly produce a wide-range of engineering products and services.

Members of the 553rd were recently consulted on how one base in southern Afghanistan should accommodate troops and equipment from other, nearby bases that are shutting down. Members included cartographer/ surveyor Richard Allahar, electrical engineer Donna Johnson, engineering geologist Sandy Zelen, and construction engineer supervisor U.S. Army Sgt. 1st Class Roland Tajalle.

Base closures, expansions and transitions involve much more than a knack for organizing and moving things. There are many directives and policies to consider. Questions that commonly surface include how best to configure structures, questions about capacity to produce electricity to accommodate the needs of residents and questions about environmental assessments.

“We look at regulations, including “The Sand Book,” explained Zelen, who deployed to Afghanistan from the USACE Baltimore District where she normally serves as the district’s enforcement (Regulatory Division) program manager.

The “Sand Book” is the colloquial term for the U.S. Central Command’s “Regulation 415-1. Construction and Base Camp Development in the USCENTCOM Area of Responsibility.”

Zelen, who has worked at USACE for some 25 years, also teaches college science and engineering courses.

In a process that bears some resemblance to Defense Base Closure and Realignment or BRAC, some bases in Afghanistan will expand to accommodate American troops and equipment from closing bases before the troops depart for the U.S. and equipment, materials and supplies are retrograded. Retrograde, from a defense logistics perspective, is the return of military materiel to the United States.

Whenever practical and within regulations, the team incorporates customer’s preferences into designs.

The base where Allahar conducted a recent geospatial survey needs to accommodate two additional company-sized elements. A company is a military unit consisting of 80–250 soldiers. The base that is scheduled to absorb these troops will not gain any new real estate, so the reconfiguration will have to happen within the existing parcel of real estate.

Although he has only worked for the U.S. Army Corps of Engineers for three years, Allahar deployed to Iraq prior to his current tour in Afghanistan. He previously served with the U.S. Agency for International Development on road design and construction projects in Sumatra following the 2004 Indian Ocean earthquake and tsunami.

Johnson volunteered for the team from the Europe District. Her specialty, electrical engineering, is one of the most sought after in Afghanistan since electrical production and distribution are essential to the country’s development.

For Tajalle, his current deployment marks his fourth combat tour in eight years. His knowledge and experience in construction management and logistics in a contingency environment are essential to accomplishing the team’s missions, said Johnson.

Consolidating bases, closing some and expanding others is necessary as more than 34,000 troops are scheduled to depart Afghanistan by the close of 2013 and Afghan National Security Forces assume full responsibility for safety and security operations in their homeland.

USFOR-A seeks the technical expertise of specialists, including the 553rd Forward Engineer Support Team– Advance to make sure the process is done right.