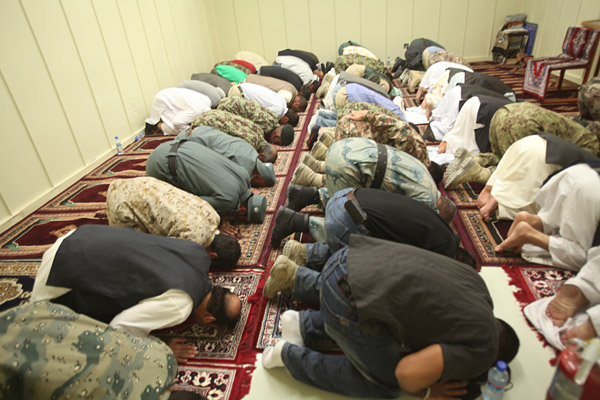 CAMP LEATHERNECK, Afghanistan – Known for his strong position on Muslims uniting against the enemies of Afghanistan by his Afghan peers and Coalition leaders, Muslim religious scholar Maulawi Meherdel Farahee expressed his confidence the people of Afghanistan will rise and take control of their country during the Regional Command (Southwest) Iftar dinner at the Afghan Cultural Center, July 25.

The Iftar dinner was a chance for Coalition and Afghan leaders to eat together and socialize during Isamic holy month of Ramazan.

Iftar is the time when Muslims break their fasting period after sunset each day during Ramazan. During Ramazan, Muslims worldwide will fast from dawn until dusk. Adult Muslims will not eat or drink. They will abstain from any physical need, unless people have medical conditions, such as pregnancy. Muslims must make peace with their enemies, refrain from swearing and gossiping.

Farahee, the deputy chief for the Ulema Council in Lashkar Gah, knows Afghan National Security Forces will experience adversity along the path to peace and stability, but “in the end” the country’s fight “against those who do us harm will be worth the fight.”

“There will be challenges,” Farahee said. “But, the people are tired of decades long of war. The (Afghan) government will make sure the people will be protected.”

The event began with a call to prayer, where Muslims in attendance prayed inside the cultural center’s mosque. Then, dinner was served with common Afghan foods, such as rice and goat meat.
Major Kraig M. Rauen, the 7th Brigade Afghan National Civil Order Police Security Force Assistance Advisor Team executive officer, said the Iftar dinner symbolizes how committed the coalition and Afghans are to making Afghanistan a safer place.

“In the Afghan culture, they take this opportunity to break fast with their family and friends,” he said. “I think doing this dinner together shows that close bond that we have with our Afghan partners, to make Afghanistan a secure place for the civilians.”
During the dinner, Maj. Gen. Miller opened up with remarks and thanked the Afghan guests for attending the dinner and highlighting ANSF’s successes and their continued push for a prosperous Afghanistan.

“I appreciate your continued work during Ramazan and confident your hard work will lead to successful reintegration and reconciliation in the near future,” said Maj. Gen. Miller. “I want you to make no mistake the coalition team’s combined commitment to Afghanistan remains strong to defeat the enemies of Afghanistan. Especially in our case, Helmand and Nimroz, to ensure you live free.”

Malook took the time to offer his thanks for the invitation, but he also spoke about the challenges his soldiers are overcoming throughout the Helmand Province.

He acknowledged the enemies of Afghanistan’s attacks are constant, but assured the Afghan and coalition leaders his soldiers will “always be ready to face the enemy.”

“From the beginning of this year, we have lost 116 soldiers with more than 400 wounded,” said Malook. “But, my soldiers are not deterred by the enemy. The enemy will not be able to sustain their attacks. We are here to bring peace and security to our country and God willing, we will.”