Obama to Americans: ‘Be worthy’ of armed forces’ sacrifices

This news story was published on May 27, 2013.
Advertise on NIT • Subscribe to NIT 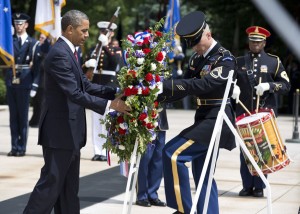 U.S. President Barack Obama lays a wreath at the Tomb of the Unknowns during Memorial Day commemorations at Arlington National Cemetery in Arlington, Virginia on Monday, May 27, 2013. UPI/Joshua Roberts/Pool

ARLINGTON, Va., May 27 (UPI) — President Obama charged Americans Monday with the task of honoring “the strength and resolve” of its armed forces and “be worthy” of the sacrifices they made.

“Let it be our task, every single one of us, to honor the strength and the resolve and the love these brave Americans felt for each other and for our country,” Obama said during remarks at Arlington National Cemetery in Virginia. “Let us never forget to always remember and to be worthy of the sacrifice they make in our name.”

Even as the country moves away from the war in Iraq and winds down the war in Afghanistan by the end of 2014, “let us never forget that the nation is still at war,” Obama said.

“Last Memorial Day, I stood here and spoke about how for the first time in nine years, Americans were no longer fighting and dying in Iraq,” he said. “This time next year, we will mark the final Memorial Day of our war in Afghanistan.”

Obama said he is concerned that country’s service personnel aren’t fully appreciated when “most Americans are not directly touched by war.” He said troops and military families also expressed concern about this to him.

He also said the country must remember its “sacred obligation” to service personnel and their families “on a more basic level.”

“Every American can do something … simple,” Obama said. “As we go about our daily lives, we must remember that our countrymen are still serving, still fighting, still putting their lives on the line for all of us.”

Before his speech, Obama placed a wreath at the Tomb of the Unknowns. Earlier Monday, the president and first lady Michelle Obama hosted a breakfast at the White House with the families of Gold Star fallen soldiers.