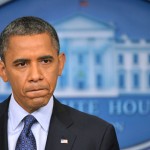 There have been no large-scale attacks on the United States since Sept. 11, 2001, the country is more secure and fewer U.S. troops are in harm’s way, Obama said while speaking at the U.S. Defense Department’s National Defense University in Washington.

However, he warned: “Now, make no mistake, our nation is still threatened by terrorists. From Benghazi to Boston, we have been tragically reminded of that truth. But we have to recognize that the threat has shifted and evolved from the one that came to our shores on 9/11.”

Obama said no U.S. president can promise total defeat of terror, but “what we can do — what we must do — is dismantle networks that pose a direct danger to us, and make it less likely for new groups to gain a foothold, all the while maintaining the freedoms and ideals that we defend.”

Obama said the core of al-Qaida in Afghanistan and Pakistan is on the path to defeat and their current operatives “spend more time thinking about their own safety than plotting against us.”

But what has emerged are various al-Qaida affiliates from Yemen to Iraq to Somalia to North Africa, with al-Qaida’s affiliate in the Arabian Peninsula being the most active in plotting against the United States, Obama said. The current unrest in the Arab world also has helped extremists in gaining a foothold.

“And finally, we face a real threat from radicalized individuals here in the United States. … Deranged or alienated individuals — often U.S. citizens or legal residents — can do enormous damage, particularly when inspired by larger notions of violent jihad.”

On Afghanistan, Obama said the United States will complete the transition to Afghan responsibility for that country’s security.

“Our troops will come home. Our combat mission will come to an end. And we will work with the Afghan government to train security forces, and sustain a counter-terrorism force, which ensures that al-Qaida can never again establish a safe haven to launch attacks against us or our allies,” he said.