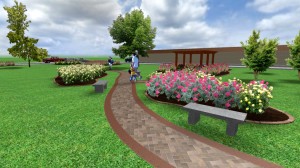 CHARLES CITY (IOWA) – Charles City’s oldest continuous service club is re-investing in the beautification of their community along with the help of an anonymous donor. The Charles City Lions Club in Charles City is taking on one of their largest club projects by revamping the 14,000 square foot Lions Club Rose Garden.

“We are pleased we have received permission from the Charles City City Council to proceed with our renovation project,” says Bob Woolm, Lions Club President. “We are even more pleased with the enthusiasm we’ve received from city leaders and the council’s 5-0 vote on proceeding.”

The garden, located at Riverside Drive and Main Street, in Charles City, was fashioned in 1971 as a community beautification project after the Charles City F5 tornado of 1968. A vacant warehouse stood at the garden’s location prior to the May 15, 1968 destruction. The local Lions Club tends to the garden, weeding, pruning, fertilizing, planting and watering for the last 42 years. Just last season they replaced and replanted 40 roses.

“Last year we started talking about how we could improve the garden,” said Jeff Otto, Lions Club member and owner of Otto’s Oasis, who developed the renovation plan. “The plan we’re implementing takes the design of Main Street and incorporates it into the garden area and carries that image and vision through and connects it to the Charles City WhiteWater park.”

“This corner is a well-traveled spot in the community, even more so now with the success of the WhiteWater course,” remarked Jeff Sisson. “It’s one of the busiest intersections in the community. The Lions want it to shine as a commitment we continue to make in this community. Jeff Otto’s ideas and plans are taking this project to the next level.”

The development plan contains a brick walkway, more than 150 roses, a pergola, new limestone benches and sign, and an educational element. The different variety of roses will each be identified so visitors to the garden can learn more about the species and know exactly what they’re looking at.

But even with Otto’s plan, one factor still remained – money. That’s when an anonymous donor stepped forward to fund the project. “This contributor said they could help the Lions make this project a reality,” said Sisson.

With the $27,000 plus investment also came a request. The donor wanted to honor the two Lions who literally gave blood, sweat, and tears to start this garden: E.L. “Eb” Willson and George Lorber. The board of directors certainly thought that was a reasonable and appropriate request.

“There were hot, steamy, days when Eb and George were on Main Street weeding and taking care of the rose beds,” recalled Sisson.

Today the 48 men of the Charles City Lions club could be considered the area’s authority on rose gardens as every Lion helps take care of the rose beds.

“Many Lions over the last 42 years have given of their green thumb talent to take care of these roses,” says Woolm. “Many have also learned rose care 101 from fellow Lions like Arnie Haller, Dan Barrett, Dennis Helmers, and others who have cared for this garden.”

Former Charles City Lions, or family members of past Lions, also have an opportunity to participate in this project by purchasing an engraved brick with a current or former Lion’s name inscribed on the brick.

“When this project is complete, and as your family travels along the brick walkway, you will see some real iconic names of Charles City,” says Woolm. “Names of men who started the club, men who helped build this community, and men who are growing the community today. It’s a history and a current civics lesson.”

Profits raised from the bricks will be used to care for the Lions Club Rose Garden and to continue Lions Club efforts in the community.

Woolm envisions the garden as a place for visitors and local people to relish, “I can see our middle school students walking through the garden in the spring during community informed trained youth (C.I.T.Y.) tours and seeing the names in the bricks.

In the summer, I can see couples having their weddings under the arbor. This is going to be a place for Charles City to show off to visitors and use regularly.”

Work on the project is commencing now that the city council has approved an agreement with the Charles City Lions. The Lions have set a feverish goal of having the project completed by Father’s Day, with a community dedication on June 28.

When asked about the quick timetable Otto and Woolm remarked nearly in unison “We’re Lions – we get things done.”

Soon after the dedication, you will continue to see Lions working in the garden; sweating, pruning and caring for the roses, and if a Lion pricks his finger on a rose thorn, he too will bleed, just as Willson and Lorber did. But you may have a hard time getting him to admit he shed a tear.