Three may face federal charges for jumping on manatees (VIDEO) 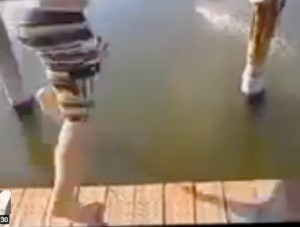 A man jumps onto a manatee and its calf in this disturbing video snapshot.

The video, posted on Facebook and YouTube, was recorded a year ago in a Cocoa Beach neighborhood. The Orlando Sentinel reported Tuesday.

A man and two friends are shown in the video luring an adult manatee and a calf close to a dock with fresh water from a hose.

The adult manatee is jumped on by one of the men cannonball-style. The calf is almost hit too. The manatees try to swim away as the men laugh and the diver swims back to the dock.

Each man in the video has been identified, authorities said, but their names will not be released until charges have been filed.

If convicted, each man could be sentenced to a year in jail and up to $50,000 in fines.