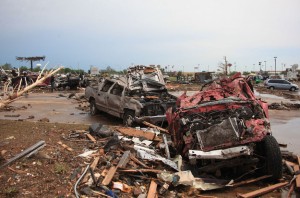 MOORE, Okla., May 22 (UPI) — Cleanup crews fanned out Wednesday across Moore, Okla., devastated by a tornado that killed at least 24 people Monday.

Initial Oklahoma Insurance Department estimates pegged damage from the storm at $2 billion. The National Weather Service said the EF-5 tornado — with winds exceeding 200 mph — was on the ground for 40 minutes, cutting a 17-mile path, 1.3 miles wide.

Napolitano’s visit came as authorities said they didn’t think any more survivors or victims were buried in the rubble and attention turned to clearing the tons of debris.

Moore Mayor Glenn Lewis said he will push the city council to pass an ordinance requiring all new housing projects be built with storm shelters or safe rooms, CNN reported.

White House press secretary Jay Carney said Wednesday President Barack Obama will travel to Oklahoma Sunday to visit with families affected by the storm and get a firsthand look at the damage.

At least 24 people, including nine children at Plaza Towers Elementary School, died in the storm. Gary Bird, chief of Moore’s fire department, said seven of the dead children were found in a classroom, not a flooded basement as had been reported.

The storm damaged an estimated 2,400 homes in Moore and nearby Oklahoma City, and 10,000 people were directly affected, said Jerry Lojka of the Oklahoma Department of Emergency Management.

An official with the Federal Emergency Management Agency said Wednesday more than 1,000 people have already sought assistance from the agency, The Oklahoman reported.

About 400 FEMA employees have been deployed to Oklahoma to assist in relief efforts, the official said.

Gov. Mary Fallin said she was left speechless after taking an aerial tour of the violent tornado’s path and inspecting the damage by car and on foot.

“There’s just sticks and bricks, basically,” she said in the lobby of Moore City Hall, which was powered by generators due to a widespread power failure.

“It was very surreal coming upon the school because there was no school. There was just debris,” she said.

Fallin said 237 people had been injured in the storm “so far as we know.” Officials said 70 of the injured were children.

Obama, who declared a federal disaster in five Oklahoma counties, said at the White House Tuesday the tornado was “one of the most destructive in history” and said he told aides “Oklahoma needs to get everything that it needs right away.”

“For all those who’ve been affected, we recognize that you face a long road ahead,” Obama said. “In some cases, there will be enormous grief that has to be absorbed.

“But you will not travel that path alone,” he said. “Your country will travel it with you, fueled by our faith in the Almighty and our faith in one another.”

On Capitol Hill, Sen. Tom Coburn, R-Okla., a leading federal budget hawk, said any disaster relief appropriated by Congress beyond an existing $11.6 billion disaster-relief fund would have to be paid for by cutting other spending.

But others said they were disgusted by the conversation.

“I think we need to all act like Americans, that we’re all in it together, neighbor helping neighbor,” said Senate Appropriations Committee Chairwoman Barbara Mikulski, D-Md.

“This is not the time for budgeteering battles. This is the time to respond with compassion and competence,” she said.