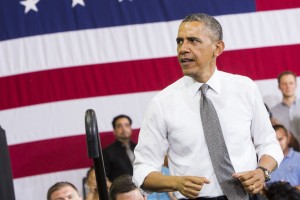 President Barack Obama delivers remarks on job creation at Ellicott Dredges, a manufacturer of dredging equipment, in Baltimore, Maryland on May 17, 2013. UPI/Kristoffer Tripplaar/Pool

WASHINGTON, May 18 (UPI) — U.S. President Barack Obama said Saturday the U.S. economy needs to create more “good, middle-class jobs, and we need to do it faster.”

In his weekly radio and Internet address, the president repeated much of what he said during a visit to Baltimore Friday, when he toured a company “that’s creating good jobs here at home by exporting digging equipment abroad.” He said once again government needs to focus on “making America a magnet for good jobs,” “making sure our workers have the education and skills they need to do those jobs,” and “making sure your hard work leads to a decent living.”

In what may have been a reference to the focus among many in Washington on allegations of multiple scandals, Obama said “too often, our politics aren’t focused on the same things you are. Working hard. Supporting your family and your community. Making sure your kids have every chance in life.”

“In a little over three years, our businesses have created more than 6.5 million new jobs,” he said. “And while our unemployment rate is still too high, it’s the lowest it’s been since 2008. But now we need to create even more good, middle-class jobs, and we need to do it faster.”

The president said corporate profits have “skyrocketed to all-time highs,” but the economy needs rising middle-class wages and incomes as well.

“And our deficits are shrinking at the fastest rate in decades,” he said. “But now we need to budget in a smarter way that doesn’t hurt middle-class families or harm critical investments in our future.”

Obama said he would visit more U.S. cities in the coming weeks and “I’m going to keep trying to work with both parties in Washington to make progress on your priorities.”

One Response to Obama: Middle-class wages need to grow