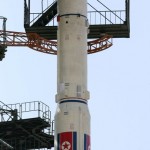 Kim Min-seok, a ministry spokesman, said two missiles were launched in the morning in a northeasterly direction away from South Korean waters, while a third was launched in the afternoon.

A Seoul official, speaking on condition of anonymity, said based on the missiles’ trajectory they did not appear to be medium- or long-range ballistic missiles.

“A more detailed analysis will be needed but the missiles launched may be a modified anti-ship missile or the KN-02 surface-to-surface missile derived from the Soviet era SS-21 that has a range of about 120 kilometers (74.5 miles),” the official said.

Kim Haing, a spokeswoman for the presidential office, said the South doesn’t consider the missile launches a serious threat to security and that they appear to be tests.

“The situation is being monitored carefully,” she said.