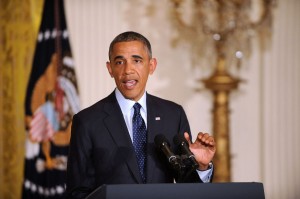 U.S. President Barack Obama delivers a statement on the situation regarding the Internal Revenue Service after meeting with Senior Treasury Officials May 15, 2013 in the East Room of the White House in Washington, DC. UPI/Olivier Douliery/Pool

WASHINGTON, May 16 (UPI) — U.S. President Barack Obama said Wednesday the acting head of the Internal Revenue Service has resigned after “inexcusable” misconduct by some IRS personnel.

Speaking with reporters at the White House, the president said he had reviewed a Treasury Department report on “IRS personnel who improperly screened conservative groups applying for tax-exempt status, “and the misconduct that it uncovered is inexcusable.”

He said he would “do everything in my power to make sure nothing like this happens again by holding the responsible parties accountable, by putting in place new checks and new safeguards, and going forward, by making sure that the law is applied as it should be — in a fair and impartial way.”

“I will not tolerate this kind of behavior in any agency, but especially in the IRS, given the power that it has and the reach that it has into all of our lives,” he said, announcing that Treasury Secretary Jack Lew had asked for and received the resignation of acting IRS Commissioner Steven Miller.

“And as I said earlier, it should not matter what political stripe you’re from — the fact of the matter is, is that the IRS has to operate with absolute integrity,” Obama said.

Telling reporters he will take questions at a news conference Thursday, the president said he has directed Lew to follow up on a Treasury Department audit “to see how this happened and who is responsible, and to make sure that we understand all the facts.”

The president said his administration will work with Congress “as it performs its oversight role.”

“Congress, Democrats and Republicans, owe it to the American people to treat that authority with the responsibility it deserves and in a way that doesn’t smack of politics or partisan agendas,” he said. “Because I think one thing that you’ve seen is, across the board, everybody believes what happened in — as reported in the IG report is an outrage. The good news is it’s fixable, and it’s in everyone’s best interest to work together to fix it.”

Congressional Republicans demanding an investigation into the matter heard Wednesday from U.S. Attorney General Eric Holder, who testified before the House Judiciary Committee.

Rep. Lamar Smith, R-Texas, — who said he had written a letter on behalf of the San Antonio Tea Party last week complaining about the targeting — asked whether the investigation would look at IRS actions beyond the Cincinnati field office, where the alleged targeting took place.

“Yes it would,” Holder said. “It will go wherever the facts lead. … At least in the beginning, we’re basing it in Washington.”

Holder said the investigation would look at potential criminal violations of the civil rights statutes and at possible false statements to investigators.

The attorney general said he did not know yet whether any higher-ups could have been involved.

“Anybody who has broken the law will be held accountable,” Holder said.

Senate Minority Leader Mitch McConnell, R-Ky., said Tuesday the White House must make clear whether it played any role in the IRS targeting of conservative groups.

“What we don’t know at this point is whether it jumped the fence from the IRS to the White House,” McConnell said on the Senate floor. “But we do know this: We can’t count on the administration to be forthcoming about the details of this scandal — because so far they’ve been anything but.”

He called on Obama “to make available, completely and without restriction, everyone who can answer the questions we have as to what was going on at the IRS, who knew about it, and how high it went.”

“No stonewalling, no more incomplete answers, no more misleading responses, no holding back witnesses, no matter how senior their current or former positions. We need full transparency and cooperation,” McConnell said.

“Clearly, we’ve only started to scratch the surface of this scandal,” he said.

Two Senate panels — the Finance Committee and the Permanent Subcommittee on Investigations — have announced plans for investigations.

Obama said in a statement Tuesday night the findings of an inspector general’s report issued earlier in the day were “intolerable and inexcusable.”

The audit by the Treasury Inspector General for Tax Administration blamed ineffective IRS management for the failure to stop employees from singling out conservative groups for added scrutiny.