McCain: Benghazi emails are a coverup

This news story was published on May 12, 2013.
Advertise on NIT • Subscribe to NIT 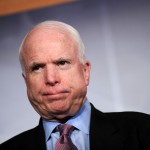 WASHINGTON, May 12 (UPI) — Sen. John McCain said President Obama’s administration engaged in a coverup of information regarding the Benghazi investigation.

His comments came after ABC News obtained emails showing that the State Department edited out references to al-Qaida and terror from the CIA’s talking points about the attack.

“I would call it a coverup in the extent that there was willful removal of information, which was obvious,” McCain, R-Ariz., said during his appearance on ABC’s “This Week.”

McCain also criticized White House spokesperson Jay Carney for saying that the CIA was responsible for the talking points and that the administration had only suggested revisions.

“For the president’s spokesman to say, well there was only words, or technical changes made in those emails, is a flat out untruth,” he said.

Sen. Jack Reed, D-R.I., who also appeared on “This Week,” disagreed with McCain and said there was no cover-up.

“The Congress has already had 11 hearings on the topic, over 25,000 pieces of documentation have been provided to the Congress,” he said.

Reed also argued that the talking points were the product of a number of agencies that agreed upon what to say.

“Well, what they did, I think, was try in a very chaotic situation, to come up with points that they felt confident of,” he said. “They didn’t want to go too far in two concepts. One, our intelligence resources or assets that you might not want to disclose. Second, there’s an ongoing investigation was just beginning. Those two factors also framed the response.”