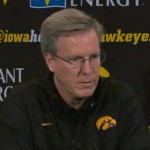 The Hawkeyes will be competing in the 2013 Battle 4 Atlantis, held over Thanksgiving weekend, Nov. 28-30. The tournament is held annually at the Atlantis Royal Towers Resort on Paradise Island, Bahamas. Iowa was originally slated to compete in the Great Alaska Shootout.

The eight-team field features Kansas, Tennessee, Villanova, USC, Wake Forest, UTEP, Xavier and the Hawkeyes. Four of the eight teams saw postseason action last season; Kansas advanced to the NCAA Sweet 16, Villanova fell to North Carolina in the NCAA second round; Iowa was the NIT runners-up, while Tennessee lost in the NIT first round.

The Battle 4 Atlantis enters its third year, with Harvard winning the tournament title in 2011 and Duke in 2012.

Tournament matchups and television information will be announced at a later date.