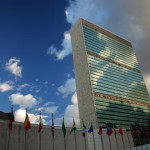 BAGHDAD, May 1 (UPI) — Iraqi leaders are called on to come together to address a deteriorating security situation quickly, U.N. Secretary-General Ban Ki-moon said.

Opposition leaders, government officials and security leaders met in Ramadi, the capital of Anbar province, to address differences. Anbar was left out of provincial elections last month because of security concerns.

Ban said he welcomed efforts to resolve what he described as a violent political crisis in Iraq. “(He) urges all Iraqi leaders to come together and engage in constructive and inclusive dialogue with the firm determination of overcoming the deep political crisis the country is facing,” a statement from his spokesman’s office read.

Iraqi forces were suspected of firing on demonstrators near the northern city of Kirkuk last month. Sunni opposition leaders in Anbar issued a call to arms against the government of Iraqi Prime Minister Nouri al-Maliki, a Shiite, in response.

At least a dozen people died in bomb attacks across Iraq, including three members of the Sunni Awakening Council, the BBC reports. The Sunni council grew out efforts to combat the insurgency in 2006, which was centered in Anbar province.