This news story was published on March 31, 2013.
Advertise on NIT • Subscribe to NIT 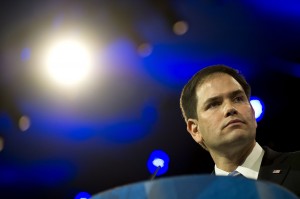 Rubio issued a written statement Saturday that sounded a cautious note amid speculation congressional Republicans and Democrats were in the home stretch on a plan to overhaul U.S. immigration laws.

The statement said the agreement among negotiators on a guest worker program for low-skilled immigrants was a step forward but not necessarily a breakthrough on a comprehensive plan, The New York Times said Sunday.

“I’m encouraged by reports of an agreement between business groups and unions on the issue of guest workers,” Rubio wrote. “However, reports that the bipartisan group of eight senators have agreed on a legislative proposal are premature.”

The Times said Rubio sounded a cautious note in a letter to Sen. Patrick Leahy, D-Vt., chairman of the Senate Judiciary Committee. The newspaper said it appeared Rubio was balancing his high profile role in the immigration debate with his political popularity among conservatives in the Tea Party movement.