Info on Sandy Hook shooting to be released 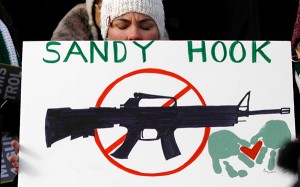 NEWTOWN, Conn., March 28 (UPI) — Release of what police found when investigating Adam Lanza, who killed 27 people in Newtown, Conn., may not add much to the gun debate, state officials said.

State Senate Majority Leader Martin Looney, D-New Haven, has said Wednesday is the date planned for a vote on a bipartisan package of gun reforms, mental health and school security legislation in the works for weeks since the Dec. 14 tragedy, the New Haven Register reported Thursday.

Officials were expected to make public the list of what police found in the vehicle that Lanza drove before his killing spree at Sandy Hook Elementary School, where he killed 20 children and six adults before killing himself. Before he went to the school, he killed his mother.

While the release of the search warrants and an accounting of what police found may be anticipated, officials say its effect on the deal likely could be minimal.

Gov. Dannel P. Malloy last week asked state police to release what they could but said he thought the facts surrounding the case were enough to proceed with gun reform, the Register said.

State’s Attorney Stephen Sedensky III, who is in charge of the case, briefed parents of the victims Wednesday, the Register said.

“I think it went well,” Sedensky said. “We were able to answer some questions for the victims’ families.”

The bipartisan legislation is expected to include a ban on future sales of magazines with greater than 10 rounds; universal background checks stronger penalties for gun violations and new registration rules, the Register said.

2 Responses to Info on Sandy Hook shooting to be released