Cyclones Advance With Win Over No. 23 Notre Dame 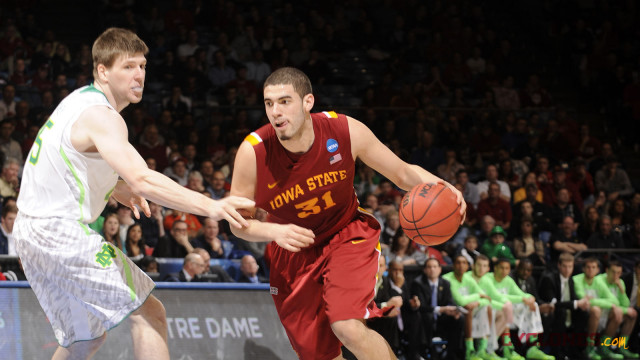 The Cyclones used a 19-3 first-half run to break away from the Fighting Irish. Trailing by a score of 18-14 after a Garrick Sherman basket for Notre Dame, Georges Niang made a hook shot at the 9:43 mark to spark the run. Just 40 seconds later, Tyrus McGee would drill a three-pointer to give Iowa State a 19-18 lead.

McGee’s triple was Iowa State’s 328th made three-point basket of the season, breaking the Big 12 record for treys in a season, previously held by Oklahoma State (2008-09). McGee’s triple also gave the Cyclones a lead they would never surrender. Chris Babb then added to the Cyclone record with back-to-back threes of his own, giving Iowa State a 31-21 cushion.

The Cyclone defense also cranked up the intensity during the run, holding Notre Dame to just one field goal over the 10-plus minute stretch. With Iowa State defenders causing havoc in the Notre Dame passing lanes, the Fighting Irish turned the ball over 14 times in the half. Iowa State committed just three turnovers in the opening half.

When Jack Cooley ended the Iowa State run with five seconds left in the half, Will Clyburn responded, taking the ball the length of the court after an Iowa State timeout for a buzzer-beating drive and bucket. The Cyclones went into the half with a 35-23 lead.

Coming out of the halftime intermission, the Cyclones picked up right where they left off, starting with two straight Ejim baskets, including a dunk less than 20 seconds into the half.

Niang’s 19 points came on 9 of 13 shooting from the floor to lead Iowa State. Junior forward Melvin Ejim followed with 17 points, and also lead the team in rebounds (8) and assists (5). Will Clyburn and McGee each had nine points.

The Cyclones will be back in action on Sunday to take on Ohio State, the No. 2 seed in the West Region at Dayton Arena at 11:15 a.m. CST.