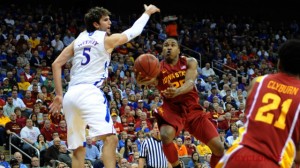 The Cyclones jumped out to an early 12-4 lead at the Sprint Center, started by a Melvin Ejim dunk on an alley-oop from Korie Lucious. Ejim also made a three-pointer to bookend the run and give Iowa State the 12-4 lead with just over five minutes into the game.

Kansas answered with a 9-0 run of its own over the next four minutes, capped by back-to-back baskets from Travis Releford and Ben McLemore. While both teams struggled shooting in a back-and-forth first half, Cyclone sharpshooter Chris Babb had 8 first-half points. Jayhawk freshman Perry Ellis came off the bench to lead Kansas with eight points of his own while shooting 4-5 from the field.

Going into the halftime intermission, the Cyclones trailed 35-31 despite shooting just 38 percent from the field, including 27 percent (4-15) from beyond the three-point line.

The Cyclones would not be able to withstand more cold shooting in the second half, and a career night from Ellis. Iowa State would not go away quietly, behind 13 second-half points from Niang, including a 90-second period in which the freshman had nine points. Ellis finished with 23 points on 10-12 shooting from the field, to go with six rebounds.