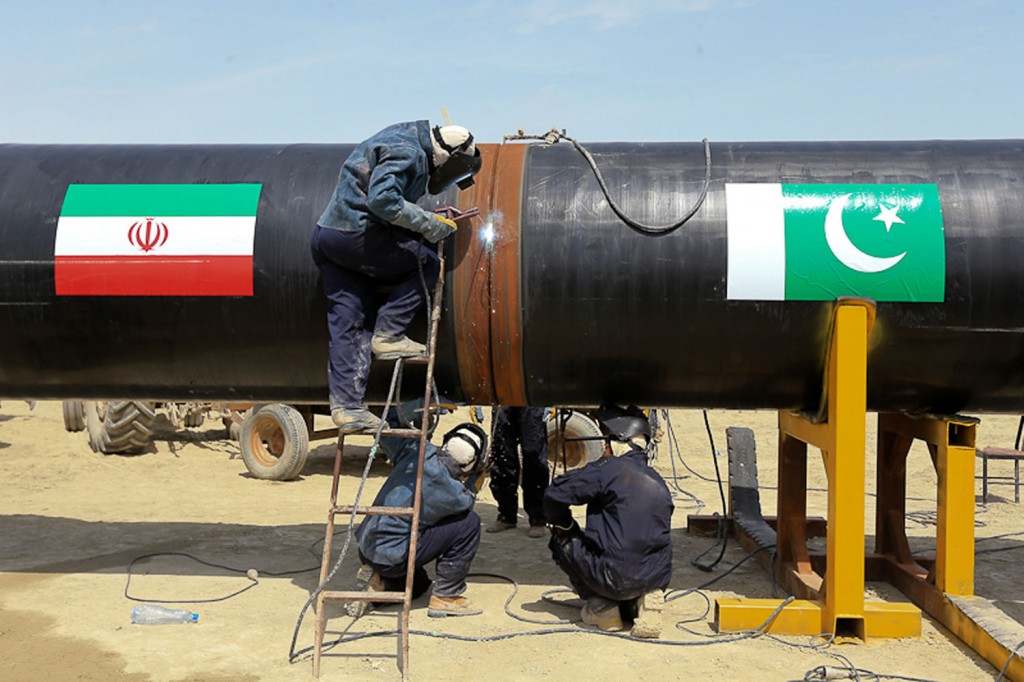 DUBAI, United Arab Emirates, March 13 (UPI) — The launch of a controversial $7.5 billion natural gas pipeline from Iran to energy-starved Pakistan, despite U.S. efforts to torpedo the project, could have a significant geopolitical effect in Asia and put U.S. policy to the test.

The 1,100-mile pipeline, expected to begin operations in 2015, marks a major boost for Iran in the face of ever-tightening U.S.-led economic sanctions over its nuclear program.

Although Iran won’t feel any economic benefit of the deal for some time, Tehran can chalk up one in the eye for “the Great Satan” as it seeks to throttle the Islamic Republic’s energy exports, its economic mainstay.

Monday’s inauguration of Pakistan’s participation in the much-delayed project is the first substantial defiance of Washington’s campaign to cripple Iran’s economy until Tehran abandons what the Western powers see as a drive to develop nuclear weapons.

Middle East analyst Kaveh L. Afrasiabi observed that the pipeline deal is also “a timely break for Tehran, which is reeling under Western economic pressures.

“It weakens the politics of leverage at nuclear negotiations with Iran which are currently at a turning point,” he wrote in Asia Times Online this week.

Iran and the U.S.-led Western powers concluded two days of talks on Iran’s nuclear program in Kazakhstan, Feb. 27 with an agreement to have follow-up technical discussions in Istanbul next Monday and reconvene for a full gathering of diplomats April 5.

Tehran’s agreement to participate in the upcoming sessions was seen as a major step forward after years of diplomatic gridlock.

“Many Western diplomats believe there needs to be significant progress this year in the decade-long standoff between Iran and the West if a military confrontation is to be avoided in 2014,” Afrasiabi observed.

The United States has warned it could impose sanctions on Pakistan, an awkward ally in the war against Islamist terrorism, for going ahead with the pipeline in defiance of the Iran Sanctions Act, and to warn off other states against dealing with Iran.

Imposing sanctions on Islamabad would put Washington “on a confrontation course with Pakistan, its important partner in the ‘war on terror’ who is destined to play a key role in Afghanistan in the aftermath of the United States’ planned withdrawal in 2014,” Afrasiabi said.

The dilemma the Americans now face, he noted, “is how to look for a greater stability role from a country that it is now threatening with (collateral) sanctions under the U.S. Sanctions Act.”

Lastly, there are U.S. concerns that India, which was part of the project when it was mooted in 1994 but withdrew under U.S. pressure in 2008, might decide to defy the Americans as well.

India, like Pakistan, its longtime regional adversary, desperately needs to boost its energy supplies to meet the demand of its burgeoning industrial sector and population.

“A successful Pakistani bid to overcome U.S. pressure could embolden New Delhi to renew its bid for the gas pipeline from Iran,” Afrasiabi noted.

“If that happens, the U.S. will have to bite the bullet to avoid major turmoil in its India policy, or face a major pileup of its foreign policy headaches worldwide.”

Afrasiabi concluded: “To prevent the issue spiraling, a more realistic U.S. policy toward Iran is needed — one that recognizes the feasibility of a ‘suspension for suspension’ agreement whereby Iran would stop its 20 percent uranium enrichment in return for the lifting of major sanctions.

“The pipeline agreement underlines that the United States is isolating itself in the battle over Iran.

“U.S. sanctions laws on Iran are simply rules without a game-plan and the sooner U.S. lawmakers come to this realization, the better.”

Meantime, Pakistan looks increasingly eastward, as it distances itself from the United States because of deep differences on security issues.

China has built a deep-water port at Gwadar on Pakistan’s Indian Ocean coast that’s likely to become a hub for pipelines running to Western China to carry Persian Gulf oil and gas — including supplies from Iran.

That would be another blow to U.S. efforts to isolate Iran.

On top of that, Iran has announced plans to build a 4,000 barrel-a-day oil refinery at Gwadar that will further undercut U.S. sanctions — and eventually ensure energy supplies going to China even if the gulf’s strategic Strait of Hormuz is closed.