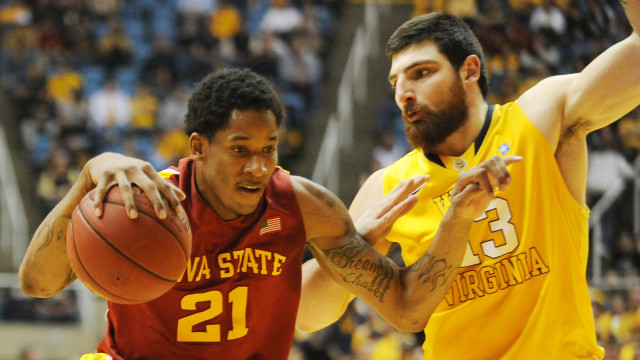 The Cyclones led by as many as 27 points in the second half, but the Mountaineers made a furious comeback, cutting the Cyclone lead to 76-72 with under a minute remaining.

Will Clyburn, who scored a game-high 27 points, made eight of his last nine free-throws to help the Cyclones hold off a late Mountaineer charge. Clyburn also tallied his seventh double-double of the season with 10 rebounds.

Clyburn had help from Korie Lucious, who scored 21 points behind a career-high-tying five 3-pointers.

It was a huge victory for the Cyclones in their quest for their second-straight NCAA Tournament, as the Cyclones finish regular-season play with 21 victories for just the fourth time in school history.

Tyrus McGee jumpstarted the run with a 3-pointer followed by a Chris Babb trey. ISU went into the break with a 44-20 lead after Anthony Booker hit a 3-pointer in the corner. ISU was 8-of-13 from 3-point range in the first half and shot 59.3 percent from the floor.

A Lucious 3-pointer with 16 minutes left in the game gave ISU a 55-28 lead. However, WVU bounced back with 13-straight points and eventually got the lead down to six points (71-65) with 3:44 remaining in the contest.

Georges Niang then came up with a huge bucket on a 15-foot baby hook as the shot clock was winding down to give the Cyclones a 73-65 lead.

After WVU trimmed the lead to 76-72, Clyburn made 3-straight free-throws to keep the Mountaineers at bay.

ISU drilled 14 3-pointers in the game, the 19th time ISU has made 10 or more treys in a game this season.