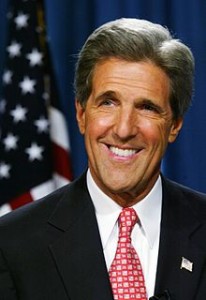 Kerry called the 11-day trip a “listening tour.” It will see him meeting with leaders in England, Germany, France, Italy, Turkey, Egypt, Saudi Arabia, the United Arab Emirates and Qatar.

Notably, Kerry’s first international excursion will not have him visiting Israel or with Palestinian leaders. He will make his first trip there as secretary of state in March when he accompanies President Barack Obama to the region.

Kerry, whose foreign policy expertise was honed on the Senate Foreign Relations committee, where he served for 28 years, the last four as chairman, has met with world leaders many times, The Guardian of London said Sunday. While at No. 10 Downing, Kerry and British Prime Minister David Cameron will likely air views on the crisis in Syria, where rebel forces and the army loyal to President Bashar Assad are locked in a bloody two-year struggle for power.

The Syrian issue is likely to be discussed at length in other stops in the Middle East and Africa on the trip, the State Department said in a statement.

While in Germany, Kerry will visit Berlin, where he lived as a young boy with his father, also a diplomat, during the Cold War. He will hold a panel discussion with German youths about their feelings on Euro-American relations.