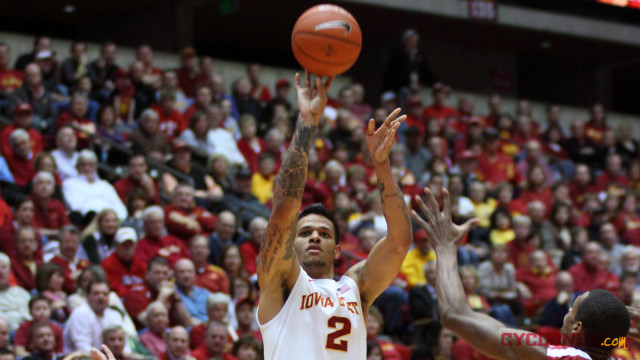 Ejim’s 12th double-double ties him for 15th on ISU’s single-season list and helped the Cyclones outboard the Red Raiders, 43-31.

Both teams traded leads throughout much of the first half. The game was tied at 26-26 before the Cyclones scored 10-straight points thanks to a pair of Babb 3-pointers. ISU scored eight points in a 40-second span in the run.

TTU’s Josh Gray then hit a 3-pointer in the closing seconds to make it a 36-29 lead at the break.

ISU led 45-39 until a 7-0 run pushed the Cyclones out in front 52-39 with 12:58 remaining in the contest. Will Clyburn broke free for a dunk thanks to a nifty pass from Georges Niang. Niang then answered with a 3-pointer to jumpstart the run.

ISU stretched its lead to 19 points (63-44) with 8:40 left in the game and made it a 79-52 advantage after Babb nailed back-to-back 3-pointers with five minutes remaining.

Tyrus McGee scored in double figures from off the bench for the 20th time this season with 13 points. Clyburn chipped in with 17 points.

ISU has scored 80 or more points in five of its last six games.