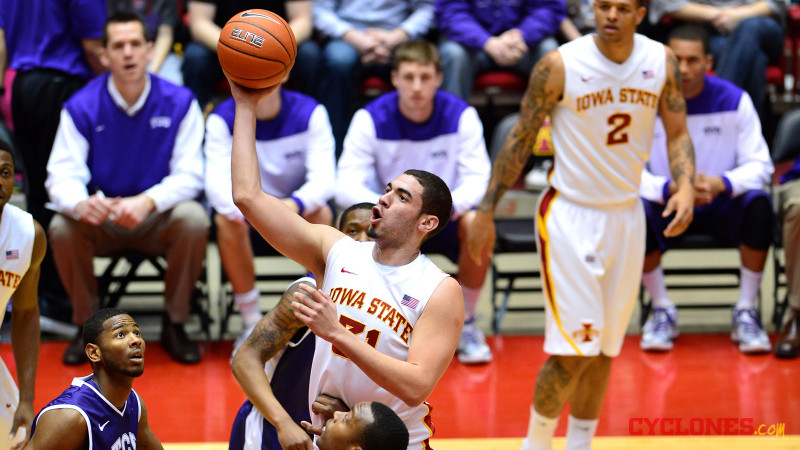 The Cyclones, which never trailed in the game, registered their 21st consecutive win at home, tying for the third-longest homecourt winning string in school history. The victory also increases ISU’s conference homecourt winning streak to 13 games, the second-best streak in the ISU record chart.

Will Clyburn added 16 points and eight rebounds in the game and Korie Lucious dished out six assists, his 18th game with five or more assists on the season.

ISU continued its hot shooting, making 51.9 percent from the field and drilling 14-of-29 shots from downtown. It marked the 14th time this season ISU has made 10 or more treys in a game and the sixth time in the last seven games.

It was still a three-point ISU lead at 24-21 until the Cyclones ended the half with four-straight 3-point plays, three from beyond the arc and one conventional, to take a 36-21 lead at the intermission. Babb, Niang and Lucious all drained bombs and Tyrus McGee was fouled on a lay-up for the conventional three-point play.

Niang ended the half with 10 points.

The Horned Frogs quickly cut the ISU lead to nine points (40-31) at the beginning of the second half, but an 11-1 Cyclone run gave ISU a 51-32 lead and virtually put the game out of reach.

Niang and Clyburn each hit 3-pointers in the run.

Moments later the Cyclones still held a 19 point-lead (58-39) with just under 12 minutes remaining after a McGee trey from the corner.

The 34-point margin of victory is the fifth-largest win vs. a conference opponent in school history.

Iowa State travels to Baylor on Wednesday. Tip-off is set for 8 p.m. CST.