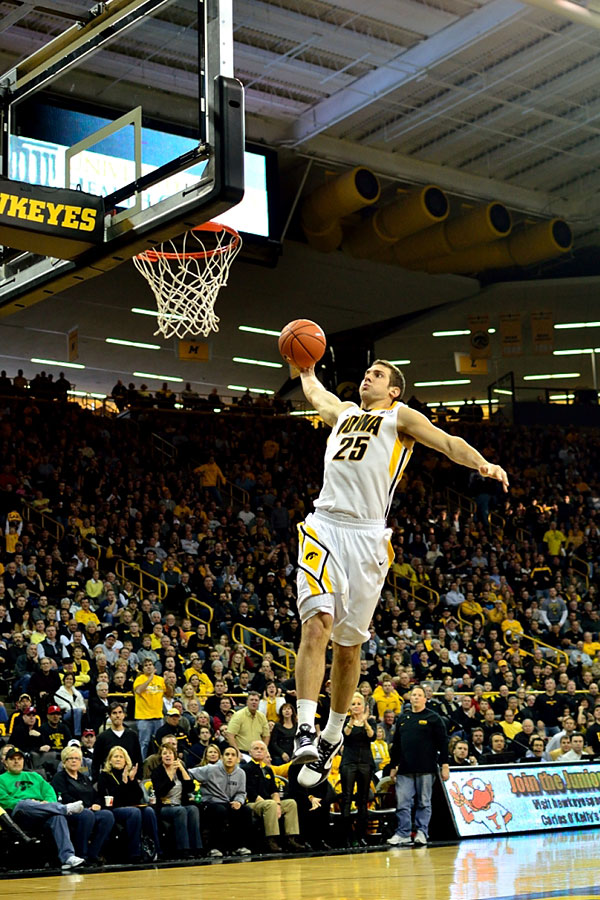 Hawkeye Senior Eric May goes up for the big dunk as Iowa put away Northwestern.

IOWA CITY – Despite missing several shots from point blank range, the Iowa Hawkeyes were able to pull away from the Northwestern Wildcats Saturday for a 71-57 victory. Iowa sweeps the season series against Northwestern with the win.

Iowa improves to 12-2 at home this season with today’s victory. Iowa is now 23-0 when holding opponents to fewer than 60 points the last three seasons.

“I thought we played great in the first half, I really did, with the exception of the fact we gave up eight offensive rebounds,” said Iowa coach Fran McCaffery. “They did miss nine threes. I felt offensively we were terrific in the first half. Defensively we had a few breakdowns, we gave up some seconds, but I thought we were great in both halves.”

Iowa improves to 14-3 when shooting 40 percent or better this season. The Hawkeyes’ 48.0 percent shooting percentage today was their best in Big Ten play this season.

Roy Devyn Marble netted 21 points, reaching the 20-point plateau for the fourth time this season and sixth time in his career, and the first time in Big Ten play this year.