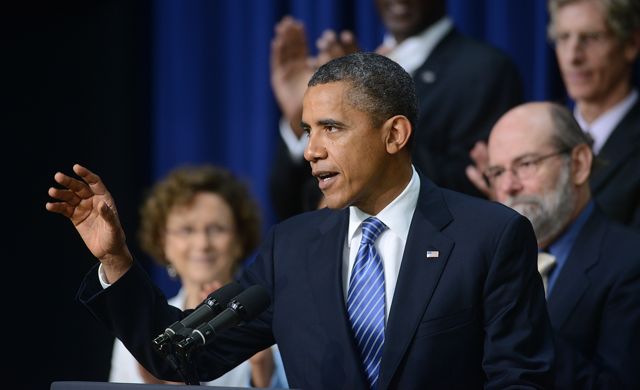 In his weekly address, Obama said GOP representatives and senators should work with their Democratic counterparts in a “balanced, comprehensive way” to resolve their differences before sequestration forces severe across-the-board cuts.

The deficit has already been cut by $2.5 trillion through spending cuts and tax hikes on wealthier Americans, he said, more than halfway to the needed $4 trillion in cuts.

Should sequestration go into effect March 1, the president said, “the result could be a huge blow to middle-class families and our economy as a whole.”

Obama said there was “another option” for the current GOP plan would put the burden for reducing the debt on seniors and the middle class.

“I believe we can finish the job the same way we’ve started it — with a balanced mix of more spending cuts and more tax reform,” he said. “And the overwhelming majority of the American people agree — both Democrats and Republicans.

“Over the last few years, we’ve made good progress towards reducing our deficit in a balanced way. There’s no reason we can’t keep chipping away at this problem,” Obama continued.

“At a time when economists and business leaders from across the spectrum have said that our economy is poised for progress, we shouldn’t allow self-inflicted wounds to put that progress in jeopardy,” he said.