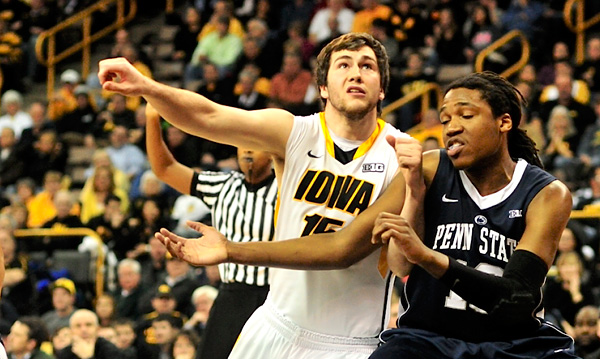 White dominated the game with his hustle and knack for knowing where to be to score the ball. It was the fourth time he has scored at least 20 points this season, and sixth in his career.

“You know, he played tonight with great energy.  We just felt like he was affecting the game at both ends and we needed to leave him out there.  He was terrific,” said Iowa head coach Fran McCaffery.

Penn State had 18 turnovers, which is the most turnovers Iowa has forced against a Big Ten team this season.

However, Penn State pulled to within 6 points late in the game, and Iowa head coach Fran McCaffery was furious at the lapse in tenacity from his team.

“We didn’t execute.  It’s not easy.  You’re trying to protect the lead.  You don’t want to quick shoot the ball,” Coach McCaffery said.

Junior Melsahn Basabe recorded his first double-double of the season and the 10th of his career. He scored 10 points and pulled down a game-high 10 rebounds.  “He had a couple really good days of practice and he’d been playing really well,” said Coach McCaffery.

Iowa next hits the road for two games, and Coach McCaffery knows his team has its work cut out for it facing Minnesota on Sunday and Wisconsin on Wednesday.

“What we need to do is play a little bit better, again, offensively,” said Coach McCaffery.  “That’s been a little bit of a struggle for us.  We hit some more jumpers tonight, that’s good to see.  But our execution is still a little bit off.  It’s closer.  They’re working at it.  They’re trying, but it’s got to be better.”