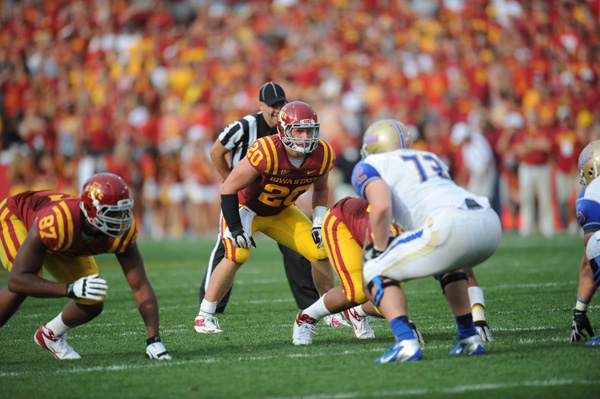 AMES, Iowa – Iowa State linebackers A.J. Klein and Jake Knott were named to the first teams of the All-Big 12 Associated Press squad and the league’s coaches team that were released Wednesday. Cyclone defensive tackle Jake McDonough earned a first-team spot in the defensive line on the coaches team. Iowa State strong safety Durrell Givens was a second-team choice on both polls. Iowa State punter Kirby Van Der Kamp was a second-team choice by the conference’s coaches.

Klein was a unanimous selection on the AP first-team. The senior leads Iowa State with 98 tackles this season. He enters the Dec. 31 Liberty Bowl in Memphis, Tenn. with 342 career tackles and 19 tackles for loss. His four career interception returns for touchdowns equal the NCAA record for linebackers. Klein was a first-team selection by the Big 12 coaches and second-team choice by the conference’s coaches last season. The 2011 Big 12 co-Defensive Player of the Year by the league’s coaches earned honorable mention honors for that award this season. Klein was an honorable mention choice on the AP team in 2010.

Knott made both first teams despite missing the final four games of the season after career-ending shoulder surgery. Playing despite the injury, Knott made a huge impact in his final collegiate game against Baylor. The Waukee native had 11 tackles, broke up a pass and forced his 10th career fumble at the goal line in a 35-21 Iowa State victory. He finished his career with 347 tackles, 18 for loss, while breaking up 15 passes and making eight interceptions. Knott was a first-team honoree on the AP team last season. He was selected for second-team honors as a sophomore by AP and on the coaches.

Urbandale native Jake McDonough was a first-team selection by the Big 12 coaches after making 31 tackles, a pair of sacks and breaking up three passes. He heads into the Liberty Bowl with 84 career tackles, 13 tackles for loss and five sacks. He earned honorable mention honors on the AP team. McDonough earned honorable mention from the league’s coaches for defensive lineman of the year.

Durrell Givens, who leads the nation in take-aways per game, was honored on both second teams after leading the nation with six fumble recoveries. He also has three interceptions this season.

Iowa State punter Kirby Van Der Kamp was a second-team choice by the Big 12 coaches. The West Des Moines product has averaged 41.6 yards per punt this season. He has dropped 28 punts inside the opponent 20-yard line with only two touchbacks. The junior can kick the long ball when needed with 10 punts of 50 or more yards in 2012. He earned honorable mention honors for Big 12 Special Teams Player of the Year from the conference’s coaches. Van Der Kamp was a second-team all-Big 12 selection as a freshman on the 2010 AP team while earning honorable mention honors from the league’s coaches that year.