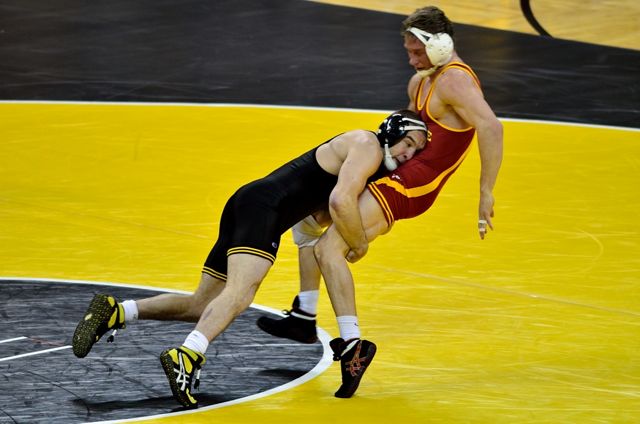 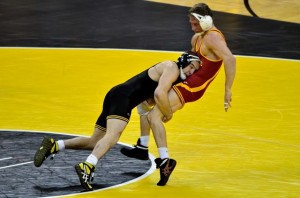 Mike Evans and Ethen Lofthouse opened the dual with a pair of wins at 174 and 184. Evans, wrestling at 174 pounds for the second time this season, opened the meet with four takedowns against Iowa State’s Tanner Weatherman to earn a 10-1 major decision. He improved to 11-0 all-time at Carver-Hawkeye Arena.

Lofthouse stayed perfect at his new 184-pound weight class with a 10-3 decision over No. 16 Boez Beard. Lofthouse scored a takedown in each of the first two periods before adding another pair and two escapes in the third frame to move to 6-0 this year.

Ramos scored two takedowns in the first period, three in the second and three in the third to earn a 19-7 win over Iowa State’s John Meeks at 133. Ramos improved to 6-0 this season with four pins and two major decisions. He is 18-0 all-time at Carver-Hawkeye Arena.

St. John improved to 6-0 this season and 17-0 all-time at Carver-Hawkeye Arena with 16-5 major decision over Logan Molina. Nick Moore gutted out a 3-2 win to stay unbeaten at 165.

Telford needed a reversal with 1:02 left in the match to earn a 3-2 win over No. 15 Matt Gibson at 285. Leading 1-0 in the third, Telford allowed a reversal nine seconds into the frame to surrender the lead, 2-1. He then returned the favor at the 1:02 mark to reclaim his advantage and hold on for the final score and improve to 6-0 this year.

Ballweg rode No. 18 Luke Goettl the entire second period, opened the third period with an escape and scored a takedown at 1:36 to earn a 4-1 win at 141. Michael Kelly followed Ballweg with a 16-6 major decision at 149. Kelly scored two takedowns in the first, opened the second with a reversal, and added two more takedowns in the third t cruise to a 16-6 major decision.

“We have work to do,” said Brands. “We have Lehigh up next and the Big Ten schedule is coming up, so we’ll have to build towards that. We’ll get to work right now.”

The Hawkeyes return to the mat Dec. 6 when they host Lehigh at 4 p.m. on Mediacom Mat inside Carver-Hawkeye Arena.

Notes… Attendance was 9,623… McDonough has won a career-best 34 straight matches… Iowa has won nine straight meetings in the series… the Hawkeye retained the Dan Gable Traveling Trophy. Since the trophies inception in 2010 the Hawkeyes have won all three meetings against the Cyclones… 1957 champion Simon Roberts was tonight’s honorary captain.