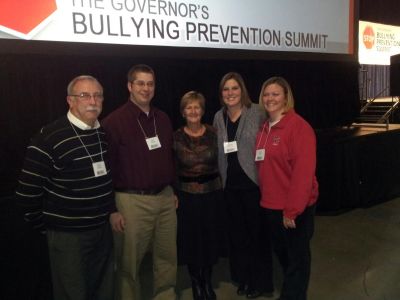 This is a busy time for families in North Iowa! There are so many activities this weekend and in the next few weeks I am afraid if I mention a few I will leave others out. The Blue Zone Kick-off is Friday evening at 5:30 in the NIACC Auditorium. This entire weekend is the Festival of Trees in Clear Lake, beginning with the Opening Night Gala at Opportunity Village Friday night and continuing on through Sunday with the Polar Bear Plunge at 12:30. The Jazz Coalition has their holiday concert at NIACC, Sunday at 3pm. Stebens will begin their production of “The Best Christmas Pageant Ever” on Tuesday, December 4th and continuing until the 16th.  All of that just covers the next 5 days!

Activity is also winding up here at home and in Des Moines at the Capitol for the upcoming session.  I was very pleased to be assigned to the Education Committee as the Ranking Chair.  I look forward to working on issues that are important to our kids, parents, teachers, administrators and ultimately all citizens of Iowa.  An educated citizenry contributes to a prosperous community. I have also been assigned to the Education Appropriations, Environmental Protection, and State Government Committees.  As always I look forward to hearing from you throughout the session on issues important to you.  Please don’t hesitate to call or email.

Iowa Has Highest Graduation Rate in the Country

According to the latest U.S. Department of Education data, Iowa had the nation’s top graduation rate for those graduating in the 2011 school year, with 88.3% of students graduating from high school.

This was the first time all states used uniform standards to measure the number of students who graduated.  Prior to this, states’ used different methods to calculate and report graduation rates, which made comparisons difficult.  Wisconsin’s 87% rate was second, while Nevada had the lowest rate at 62%.

The number of unemployed Iowans fell to 83,800 in October, down from 96,000 a year ago.  The job gains were led by 6,000 more Iowans working in non-farm jobs, including 1,400 new manufacturing jobs which reversed three straight months of job losses in the sector.

The trade and transportation fields saw a job loss of 800, due mostly to a decrease in wholesale trade related to machinery and equipment sales.  Financial activities saw the only other loss after a small decrease in volume.

Iowa’s Economic Development Authority (EDA) has awarded financial assistance to seven companies for job creation and expansion projects.  The awards will lead to the creation of 120 new jobs and will account for $36.5 million of new capital investment to the state.

Dupont Pioneer in Johnston, Excel Engineering in Diagonal, and Grain Millers Inc. of St. Ansgar are among the companies receiving assistance.  For more information on the awards please visit: http://www.iowaeconomicdevelopment.com/documents/showdoc.ashx?idArticle=5685&ID=3

Iowa has launched a new resource where youth, parents, school personnel, and all concerned Iowans can get help and information about bullying and youth suicide.  The new hotline, dubbed Your Life Iowa, is available 24 hours a day, seven days a week.  Individuals can call or text the number 855-581-8111 to talk with trained counselors who will provide guidance and support about bullying as well as critical help to youth who feel they’ve run out of options and may be considering suicide.

Youth who are bullied also have a higher suicide risk.  Bully-related suicide can be connected to any type of bullying, including physical, emotional, or cyber-bullying.  Nationally, more than 34,000 suicides occur each year.  Suicide is the second leading cause of death among Iowa’s youth aged 15 to 19 years old.  A 2009 national survey ranked Iowa 14th in the nation for suicide rates among teens and young adults aged 15 to 24 years old.

Identifying warning signs, which anyone can do, is key to preventing a suicide of a loved one.  Eighty percent of people who commit suicide have talked about it or given definite warning signs.  Warning signs and risk factors may include:

For more information on Your Life Iowa, visit www.yourlifeiowa.org.   Your Life Iowa is funded by a grant the Legislature approved this year for the Iowa Department of Public Health (IDPH).  The announcement was made as education leaders, elected officials, and students met in Des Moines to discuss ways to prevent bullying at the Governor’s Bullying Summit.