Council had been warned about trestle on East State Street underpass; failed to act 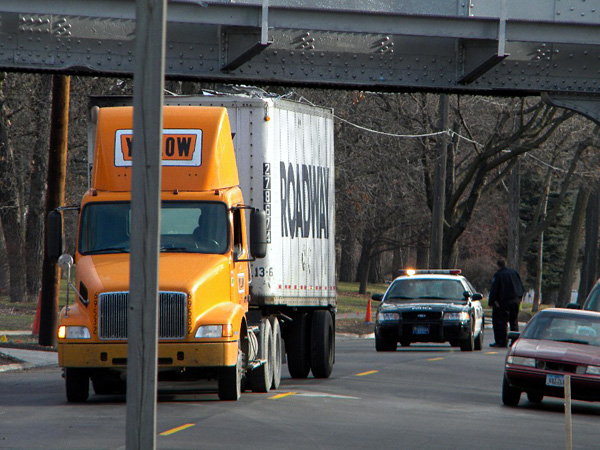 MASON CITY – The Mason City Council had been warned months before about the trestle on East State Street, which has been without signage indicating the allowable height of vehicles that are able to pass under it.

On Tuesday, a truck was damaged as it attempted to pass under the trestle just east of Carolina Avenue on East State Street.

A Mason City citizen informed NIT today that he predicted an incident would occur, and had contacted City Hall and all six City Council members.

“This email should be of concern to all members of council and not just John Lee my councilperson,” the man wrote in June. “This has to do with signage on State Street going west concerning the railroad trestle. There is a sign for the East bound traffic proclaiming it is only twelve foot high but nothing for the West.

“How would you like to be the semi driver that pulls down there and has to back up almost two blocks when he/she finds out they will not fit under it? And to top it off, without any help from anyone!”

The man’s prediction came true, as a semi-truck and trailer was damaged at the trestle on Tuesday morning.

Another NIT reader wrote us, asking “How much will this lawsuit cost us?”

Still another NIT reader asked “How many other issues are there in this city that the council ignores and just pawns off on city staff?  Do they even try?”

City Engineer Mark Rahm forwarded a reply to the man, which NIT received just this morning.  Apparently, the decision to place a height restriction sign at the trestle was left to city staff, and no council person pursued the issue nor followed up on it.

“I was made aware of your concerns in a June 18, 2012 email by way of the City Administrator,” Rahm wrote.  “The concern was regarding the lack of signage relating to low clearance of the railroad bridge near Carolina Avenue. The Mason City Engineering Department followed up with your concern, however chose not to post signage at that time due to the soon to begin rehabilitation project on East State Street. The existing signs along the project were removed as the contractor progressed with their work and therefore posting a sign during that reconstruction period would not have been effective.

“Low clearance and supplemental signs were included in the project signing schedule which was bid as part of the original project,” Rahm continued. “The signing contractor is scheduled to post new signs along the project this week. The Iowa One Call was placed several days ago so I expect to see the contractor on site very soon. The new low clearance signs for westbound traffic are scheduled to be installed near Virginia Avenue such that drivers see them well in advance of the bridge and avoid having to back their vehicle down the street. This was an unfortunate incident and the chance of repeating should be rectified when the new signs are installed.”