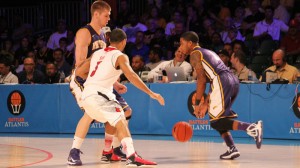 PARADISE ISLAND, Bahamas (AP) — Louisville had this one wrapped up. The second-ranked Cardinals, despite playing a terrible first half, were leading Northern Iowa by 18 points with just under 12 minutes to play.

Nobody told the Panthers about how it was supposed to end.They managed to get within a point with 2:06 left, but Louisville found a way to hang on for a 51-46 victory on Thursday night in the opening round of the Battle 4 Atlantis.

“We didn’t play well, but when you don’t play well, there is a reason. And the reason was their team,” Louisville coach Rick Pitino said. “They are really good at what they do. They clog it up so you cannot get anything inside. They will give you a few shots from the outside, which we didn’t hit. Our press was very effective, but because we shot such a low percentage, we couldn’t get it to take its toll.”

The Cardinals had a bad first half, looked as if they straightened things out but then stumbled to the finish.

“I think they scouted us perfectly. I think they did a really good job taking away all our pick-and-rolls, packing it in,” Pitino said. “But we also played excellent defense and made big plays. We knew this was going to be a war and was going to go down to the buzzer.”We played hard, but they made us look bad,” he said.

Louisville (4-0) will face No. 13 Missouri in Friday night’s semifinals. The Tigers beat Stanford 78-70.The Cardinals somehow held a 26-20 halftime lead despite shooting 27.0 percent from the field (10 of 37) and committing 10 turnovers.

They held Northern Iowa (3-1) to one field goal over the opening 10:47 of the second half and that cut Louisville’s lead to 40-24. The Panthers were 1 of 13 from the field and committed eight turnovers in that span.

“At 40-22, all the momentum was on Louisville’s side,” Northern Iowa coach Ben Jacobson said. “You keep thinking about making the right plays and doing a couple things. At the same time, you think you have let a couple of opportunities go on layups and ball-handling plays we didn’t make. But that is where the guys get a lot of credit for continuing to get back and transition and continue to defend and block out, sharing the offense.”

It was far from an easy ride to the finish as the Cardinals went 5:12 without scoring and suddenly the Panthers were chipping away.

Jake Koch made two free throws with 2:06 left to cut Louisville’s lead to 45-44.Gorgui Dieng scored for the Cardinals and after a missed 3 by Northern Iowa, Luke Hancock made one of two free throws for Louisville with 54 seconds left.

Koch made two free throws with 42 seconds left to make it 48-46.Peyton Siva drove the lane and missed a short shot for Louisville, but the ball was tied up and the arrow favored the Cardinals with 6.3 seconds left. On the inbounds pass, Wayne Blackshear found Smith who laid it in and was fouled with 5.1 seconds left for the final margin.

Marc Sonnen had 11 points for Northern Iowa and Koch finished with 10.”We knew coming in how good they are,” Sonnen said. “They are No. 2.”

Nate Buss was the man who made the difference for the Panthers scoring eight points in the final 13 minutes — his only playing time of the game. The 6-foot-9 sophomore didn’t score as a freshman and had a total of 24 points coming in.

“We did a great job of them not intimidating us,” Buss said. “We’re just as tough and can be just as aggressive. Our mentality coming in was a huge part of why it was the way it was.”

Friday’s game between UNI and Stanford will be shown live on AXS TV. UNI’s final game of the tournament on Saturday will also be shown on AXS TV. AXS TV is ch. 340 on DirecTV and ch. 362 on Dish Network. Check with your local cable provider for access to AXS TV.

NOTES: Jake Koch blocked three shots vs. Louisville and has tallied 86 career blocks to move into No. 6 all-time at UNI … Koch passed former Panther Scott Stafford’s total of 85 blocks … Jason Sims ranks No. 5 on the blocked shot list with 90 … Koch has made 18 straight free throws after making all six attempts against Louisville … UNI and Stanford have never met in men’s basketball.

0 0 votes
Article Rating
Subscribe
Login
0 Comments
Inline Feedbacks
View all comments
PrevPreviousSeventh Heaven for some Vikings’ draft picks
NextFerentz on narrow loss to Nebraska: “They did the better job in the second half”Next