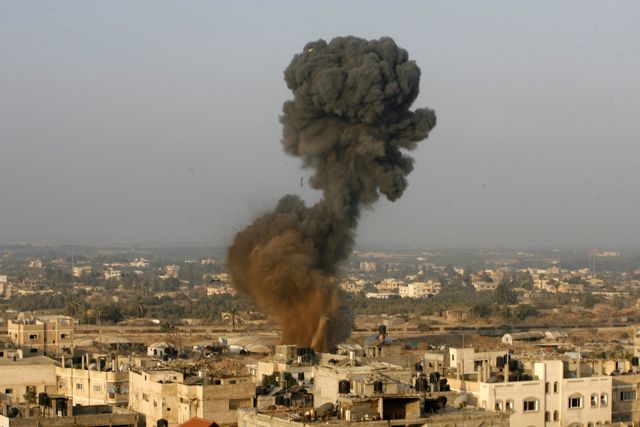 By Nancy A. Youssef and Sheera Frenkel, McClatchy Newspapers –

CAIRO — Israel and the Islamist group Hamas inched closer Tuesday to agreeing to an Egyptian-negotiated cease-fire that would end a weeklong Israeli offensive in the Gaza Strip that has killed at least 116 Palestinians and threatened to devolve into all-out war. Both sides suggested that the announcement of the cease-fire could come as soon as Wednesday.

With a cessation of hostilities possibly just hours away, both sides stepped up their attacks late Tuesday, with artillery fire so intense near the Israeli town of Erez on the Gaza border that computers were shaken from tables by the vibrations from outgoing shells.

“Each side will keep shooting until the last possible moment,” said one Israeli military official currently based along the Gaza border, who agreed to speak only on the condition of anonymity because he wasn’t authorized to talk to a reporter. “We each have to show that we didn’t retreat first.”

Meanwhile, Gaza militants launched scores of rockets, including one that struck the southern Tel Aviv suburb of Rishon Lezion. No injuries were reported.

As the final details of the cease-fire apparently were being refined, both sides claimed victory. Israel said the weeklong assault on Gaza had improved security for thousands of Israelis who have been targeted by Hamas-fired rockets. Hamas said the fighting had given it greater legitimacy among the Arab nations.

The United States, which was uncharacteristically on the sidelines, appeared to have successfully played a limited but key role in finalizing the deal.

A senior Israeli military official told McClatchy Newspapers that the military had accomplished “all it could” given the situation and that “deterrence had been established,” a reference to the Israeli claim that its assault had been intended to stop rocket attacks from Gaza.

Hamas officials in Gaza told McClatchy Newspapers that they “had fought brave and well” and that their rockets had “struck deep into the heart of Israel,” bringing war to a part of Israel that previously had been immune to Gaza-based violence.

One Hamas official who has been privy to the cease-fire talks in Egypt but who wasn’t authorized to speak to members of the news media said, “Hamas has shown itself to be strong and powerful. We stood up to Israel and achieved success.” He added that a string of visits by foreign officials from across the Arab world had given Hamas “a boost to keep going.”

Secretary of State Hillary Clinton arrived in Jerusalem late Tuesday night in a hastily arranged trip to the region and is expected to travel to Cairo to stand alongside top leaders as they announce the details of the deal.

Many here said her arrival gave both sides new incentive to reach a deal without appearing to lean on the United States. After five days, the talks had appeared to have stalled.

Clinton met with Israeli Prime Minister Benjamin Netanyahu in Jerusalem and called for a “comprehensive peace.”

“President Obama asked me to come to Israel with a very clear message: America’s commitment to Israel’s security is rock solid and unwavering. That is why we believe it is essential to de-escalate the situation in Gaza,” Clinton said at a joint news conference with Netanyahu. “The rocket attacks from terrorist organizations inside Gaza on Israeli cities and towns must end and a broader calm restored. The goal must be a durable outcome that promotes regional stability and advances the security and legitimate aspirations of Israelis and Palestinians alike.”

Clinton also was expected to visit Ramallah, the West Bank city that is the capital of the Palestinian Authority — the Palestinian government that Israel and the United States recognize — before traveling on to Cairo, where she will meet with Egyptian President Mohammed Morsi.

One State Department official, speaking only on the condition of anonymity because he wasn’t authorized to talk to a reporter, said Clinton had no specific agenda other than encouraging the sides to reach agreement. “Sometimes there’s no substitute for showing up,” the official said.

The hours leading up to what should have been a heralded deal Tuesday night only underscored how precarious the agreement remains. Even as talk of a cease-fire grew, Israel continued its aerial and sea bombardment of Gaza, intended to cripple Hamas’ ability to fire rockets into Israel. The Israeli military reported its first death in the conflict, an 18-year-old soldier. Three other Israelis died last week when a Hamas-fired rockets struck an office building.

Israel’s chief demand was a long-term truce between the two sides, in which all militant groups in Gaza must agree not to open fire on Israel, an Israeli official told McClatchy Newspapers. Other terms still being negotiated are a demand by Israel that Hamas stop smuggling weapons into Gaza, and a demand by Hamas that Israel lift its blockade of the Gaza Strip.

The official confirmed that another demand that was “on the table” was an enlarged buffer zone between Israel and Gaza.

Palestinian officials, meanwhile, said the key sticking point was the lifting of a five-year blockade on Gaza by Israel, and the opening of the Rafah crossing between Gaza and Egypt. The Hamas leadership also wanted to secure a promise from Israel that none of its political or military leaders would be under threat from targeted assassinations.