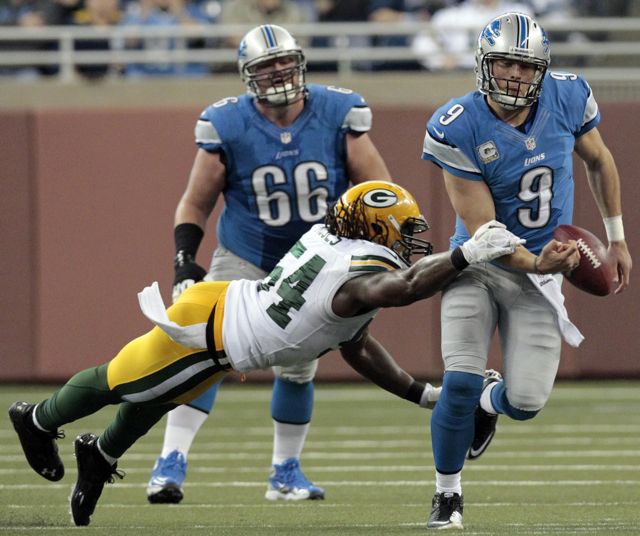 DETROIT — The Green Bay Packers made sure there was no fourth-quarter magic for the Detroit Lions on Sunday, and it doesn’t look like the playoffs will be in the Lions’ future, either.

Matthew Stafford turned the ball over three times and Aaron Rodgers found Randall Cobb for the game-winning 22-yard touchdown pass with 1:55 to play as the Lions lost their second straight game to fall to the brink of playoff elimination, 24-20, at Ford Field.

Stafford threw interceptions in each half, lost a fumble late in the second quarter and completed just 17 of 39 passes on a day when the Lions got 3½ quarters of standout defensive football.

At 4-6, the Lions probably need to win all of their remaining six games to have a shot at an NFC wild-card spot. They host the Houston Texans Thursday in their annual Thanksgiving game.

The Packers (7-3) have won five straight.

Rodgers finished 19 of 27 passing for 236 yards and two touchdowns, and led the Packers on a six-play, 82-yard drive that proved to be the game-winner

Jermichael Finley turned a short pass into a 40-yard gain on the third play of the drive and Cobb beat Jacob Lacey on a corner route on third-and-1.

Stafford threw four straight incompletions on the ensuing drive, and after Mason Crosby kicked a 39-yard field goal, and the Lions’ desperation lateral play ended in a Calvin Johnson turnover.

Johnson caught five passes for 143 yards to top 1,000 yards for the third straight season, Stafford finished with 266 yards passing but a 54.0 quarterback rating, and Nick Fairley had seven tackles, two sacks and a forced fumble.

Crosby missed field goals of 50 and 38 yards for Green Bay, and the Packers went for a fourth-and-4 early in the game instead of attempting a 48-yard kick.

Rookie Riley Reiff played most of the final three quarters at left tackle for the Lions in place of Jeff Backus, who suffered a hamstring injury that could endanger his iron-man streak. Backus has made 186 straight starts, the third longest active streak in the NFL.