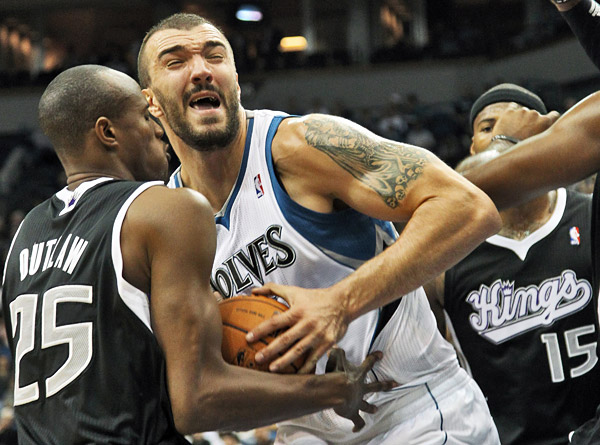 MINNEAPOLIS—Opening the season without both of his young stars for the foreseeable future, Minnesota Timberwolves coach Rick Adelman went searching for energy more than anything else Friday night at Target Center.

He found it in both some usual and unexpected places during a 92-80 victory over the Sacramento Kings before an announced sellout audience.

He found far more than that during an opener in which the Wolves led by 18 points late in the second quarter, trailed by five midway through the third and prevailed anyway against a Kings team that opened its season Wednesday by losing at Chicago.

The Wolves bench outscored Sacramento’s 46-28 thanks to bubbly performances from Cunningham, J.J. Barea and Greg Stiemsma, and as the Wolves did in their final two preseason games, they once again held the opponent to fewer than 20 points in a quarter.

This time, it was the Kings’ 15-point fourth quarter that won the game for the Wolves, even though the home team shot only 36.8 percent from the floor and made only two of 17 three-point attempts.

“We were good defensively pretty much the whole night,” Adelman said. “Offensively, we have a long way to go.”

Without Rubio and Love, the Wolves are still searching to discover who can win games for them when it matters most, and how.

On Friday, starters Brandon Roy and Nikola Pekovic and reserve Chase Budinger all provided important fourth-quarter baskets, even though those three players combined to shoot 9-for-32. The Wolves made up for poor shooting in part by making 26 of 36 free throws, while Sacramento took only 16 attempts from the line.

“That was a good win,” said Roy, who hadn’t played a real NBA game since the 2011 playoffs with the Portland Trail Blazers. “I hadn’t won a game in a long time, so it was good to get the first one out of the way.”

Fellow newcomer Andrei Kirilenko provided a familiar stat line — 10 points, seven rebounds, five assists, a block — and timely defense all night, particularly in the fourth quarter, and Cunningham, Barea and Stiemsma all delivered that aforementioned energy just when it seemed like all was about to slip away.

“This team is deep enough, we’ve got multiple guys who can come off the bench, bring energy, do different things,” said Stiemsma, who proved to be one of them with a nine points, seven rebounds and four blocks in 16 efficient minutes. “I don’t think we lose a whole lot when we go to our bench.”

The Wolves built that 18-point lead thanks in good part to that bench and Barea’s 21-point night. The Kings changed the game with a 31-9 run that ended the first half and started the second, but the Wolves turned the game right back around with a 14-3 burst of their own just when big Sacramento center DeMarcus Cousins left the game following his fifth foul midway through the third quarter.

Through it all, Barea looked fit and fearless, like the NBA champion player they thought they had signed to a four-year contract before last season.

“I don’t want to talk about it, but I feel great,” said Barea, who looks noticeably leaner compared to last season’s start. “I felt great in practice, great in warm-ups. I’m feeling good, so I was excited to get out there. I got a season under belt with this coach. I know what he wants, but I got to play my game. I have to be aggressive.”