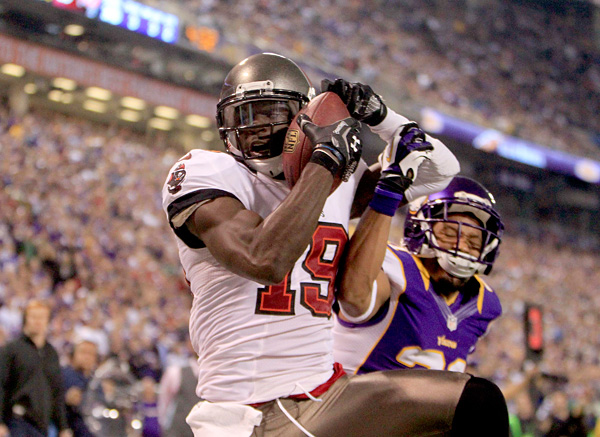 MINNEAPOLIS — The Vikings’ defense was doing exactly what everyone thought it needed to do in order to beat Vincent Jackson, Mike Williams and the deep-throwing Buccaneers at home on a short week.

Unfortunately for the Vikings, everyone forgot about a little rookie running back named Doug Martin. The 5-foot-9, 215-pounder amassed 214 yards and touchdowns rushing and receiving on 32 touches from scrimmage in the Buccaneers’ 36-17 rout at Mall of America Field on Thursday night.

With 13 minutes, 39 seconds left in the third quarter, Jackson had just one catch for 26 yards — the same Jackson who last week caught seven passes for 216 yards and a touchdown and was second in the league with 10 catches of 20 yards or more.

Meanwhile, Williams had two catches for 5 yards — the same Williams who was 12th in the league with six catches of 20 yards or more.

Why then was Vikings defensive end Brian Robison going berserk on the sideline, yelling at the defensive backs in particular and other defenders in general as the Vikings fell behind 27-10.

“At that point, I just wanted us to stand up and make a stop,” Robison said. “But, bottom line, they did a good job of pretty much beating our brains in.”

Robison was reacting to Martin’s 64-yard touchdown reception that started as a simple dump pass and ended with the little guy blazing past and through several missed tackles.

“We got to do a better job because these little backs are killing us,” said Robison, also referring to Arizona’s 5-9 LaRod Stephens-Howling, who ran for 104 yards against the Vikings on Sunday. “The short-statured guys, I don’t know if it’s guys trying to tackle high and getting stiff-armed or what. It’s just not pretty football at all.”

The Vikings gave up 135 yards on 29 carries (4.7) to Martin, the 31st overall pick out of Boise State. Martin’s second carry of the game was a 41-yard explosion to the Minnesota 17-yard line. The Bucs took a 3-0 lead four plays later, expanded it to 13-0 and never trailed.

When the Vikings climbed to within 13 points in the fourth quarter, it was Martin’s 3-yard blast up the middle on third-and-goal that essentially ended the game.

It was the fifth third-down conversion of that particular drive. The first four came on passes on third-and-long, including a 34-yarder to Williams.

“When they can run the ball the way they did, it opens their playbook up to run some play-action passes, which eventually opens up the passing game,” Robison said. “Just Football 101.”

“There was nothing deceptive at all about what they did,” Robison said. “It was simple lead plays. They were just running downhill plays and we weren’t making the plays we needed to make.”

At 5-3, the Vikings probably shouldn’t panic. But Robison sounded like a guy who has his finger hovering above the red button.

“We got lucky last week (in a win over Arizona) because we got a lead on that team and they had to pass on us,” Robison said. “This week was the total opposite. Luckily, we have a three-day weekend now so we can rest our bodies. We got to come back to work next week and put this one behind us and be ready, because if we go up to Seattle (on Nov. 4) and play this way again, they’ll whip us up, too.”