Vikings win when all isn’t right 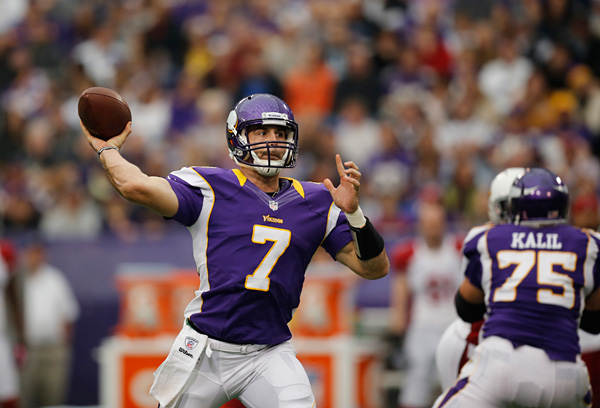 MINNEAPOLIS — Let’s get this out of the way: The Vikings’ 21-14 defeat of Arizona on Sunday was, well, ugly.

And if you left Mall of America Field feeling as if you’d seen something beautiful, those extra-strength beer goggles must really have been working.

“It’s a good thing to be disappointed when you’re 5-2,” quarterback Christian Ponder summarized during his glum five-minute postgame podium stop.

Sunday’s lowlights: Percy Harvin returned the opening kickoff 103 yards for a score. But an illegal block on Marvin Mitchell erased that. It was one of seven Vikings penalties, three committed by the special teams.

Tackling, too, was an issue at times with Cardinals back LaRod Stephens-Howling proving more slippery than a thrashing walleye on his way to a 104-yard rushing day.

And Ponder? He was a disaster, completing only one pass after halftime — a 4-yarder to Adrian Peterson with 3:56 left in the third quarter.

The second-year quarterback threw for only 58 yards all day with two head-scratching interceptions, one inside his own 20 that basically handed the Cardinals their first touchdown.

So how on an afternoon when the offense managed only 209 yards and 12 first downs did the Vikings roll to 5-2 without ever trailing or even feeling threatened?

The truth: Because this is how they are built to win in 2012 — with a ferocious yet disciplined defense and a punishing ground game.

Sure, the NFL as a whole might be evolving into an aerial show. But Vikings coach Leslie Frazier is old-fashioned. His plan is to refine his energetic defense and then use Peterson as often as Peterson wants to be used.

Which, for the record, is a lot.

That formula worked perfectly Sunday with Peterson delivering 153 rushing yards and a 13-yard first quarter touchdown run. The defense, meanwhile, dominated up front and stayed true to its identity.

Poor John Skelton, the Cardinals quarterback who was battered all day, sacked seven times and also forced into a fumble and an interception.

Oh, and let’s not forget Kevin Williams’ first sack this season. That came on fourth-and-10 with 6:16 left as the entire line attack charged Skelton as if he were the candy under a ruptured piñata.

Williams got there first. But Allen, Robison and Everson Griffen were all right there too.

“That rush kept getting there,” Williams said. “And don’t forget about our coverage. Those guys in the back held it down.”

It worked. Arizona’s longest pass was a 22-yarder to tight end Rob Housler.

Fitzgerald wound up with four catches for only 29 yards. That’s less yardage than Smith had on his interception return touchdown in the third quarter, an instinctive pick and dash to the pylon after Skelton was hurried on his throw to Early Doucet.

“That was a huge jolt for us at a big moment in the game,” cornerback Chris Cook said. “Whenever we get a pick, we preach ‘Take it to the crib.’ Harrison took it to the crib and we had a party in the end zone.

“Today showed we can win games on defense.”

Then there was Peterson, off and running from his second carry on. That first big burst went for 27 yards, vintage A.D. in its explosion and power.

With the Vikings noticing elements of Arizona’s defensive pressure that could be attacked, Peterson averaged 6.7 yards on 23 rushes, even as the Cardinals loaded the box all day.

No wonder Frazier dipped into the superlative bank to label Peterson “special,” “inspirational,” and “a pro’s pro” all within a few breaths, noting how invaluable the running back’s contributions were.

“That’s the formula for success if you’re in a tough situation throwing the football,” Frazier said.

Added Peterson: “We had the mindset that we were going to be able to run the ball no matter what. We showed that today.”

The Vikings also showed they could succeed on a day when not everything was pretty. At this point in their building process, that’s a big deal.