Pope declares Native American, 6 others to be saints 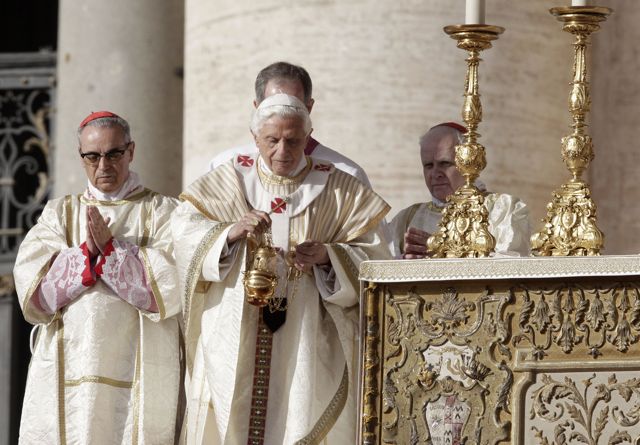 VATICAN CITY — Tens of thousands of pilgrims, including Native Americans in tribal regalia, Hawaiians with leis and Bavarians in lederhosen, packed St. Peter’s Square on Sunday as Pope Benedict XVI canonized seven saints, one a Mohawk who has long been an icon for Indians throughout the United States and Canada.

The elevation of Kateri Tekakwitha to sainthood was a breakthrough not only for Native Americans, but also for the Roman Catholic Church. The pope went out of his way to emphasize the church’s respect for Indian culture and tribal traditions, which wasn’t always the case.

Born in 1656 in what is today upstate New York, St. Kateri died in what is now Canada just 24 years later, having spent the last four years of her life as a Christian. Benedict praised her for staying “faithful to the traditions of her people,” except for their religious beliefs. “Her greatest wish was to know and to do what pleased God She lived a life radiant with faith and purity,” he said.

Unlike most of the others canonized Sunday, Kateri was neither a martyr nor a member of a religious order, but Benedict gave her a bigger challenge than anyone else. “Protectress of Canada and the first native American saint, we entrust to you the renewal of the faith in the First Nations and in all of North America,” he said in his homily.

A second American canonized Sunday, Mother Marianne Cope, born in Germany in 1838, was a Franciscan nun who tended a leper’s colony in Hawaii in the 19th century. Pedro Calungsod was a martyr at age 18 in 17th century Philippines. Jacques Berthieu, a French priest born in the mid-19th th century, spent much of his life in Madagascar, and Giovanni Battista Piamarta, born in 1841, served as a parish priest in Brescia, Italy. Maria Carmelo Salles y Barangueras, born in 1848, founded a Spanish religious order, and Anna Schaefer, born in Germany in 1882, intended to join a religious order but was prevented by ill health.

The journey for Kateri, some of whose bone fragments were presented to the pope as part of the ceremony, was a long one. She was first proposed for sainthood more than a century ago. Even after so long a wait, her elevation could mark the beginning of a new relationship between Native Americans, in the United States and Canada, and the Roman Catholic Church.

“We’ve been waiting so long for this, for 32 years (since her beatification, the second step in the process to sainthood), and we didn’t know it would happen,” said Clementine Little Hawk Hernandez, a Lakota Sioux, 71, from San Pedro, Calif.

“I never thought in my lifetime I would see her as a saint,” said Cindy Ginnish, 51, a member of the Canadian MicMac tribe, which resides in Newfoundland and New Brunswick. “I work with addicts,” she said, “We often say, ‘Pray to Kateri.’ In my own personal experience, she has always helped so many people.”

Ginnish also admitted to intertribal envy. “I always was jealous of the Mohawks. They have her,” she said.

Phil Fontaine, probably a spokesman for the First Nations, as Canada calls its Native Americans, said Sunday that the canonization should be a milestone in relations with the Roman Catholic Church.

In 2009, Benedict granted Fontaine and other First Nation leaders an audience in which he apologized for the abuse and mistreatment of Indian children in so-called residential schools that the church operated on behalf of the Canadian government. . This led to the start of a broader reconciliation.

“Throughout history, the Roman Catholic Church has been reluctant to apologize,” he said. “We came here hoping they would issue a signed statement, acknowledging the church’s role in the (abuses in the) residential schools. We were pleased, reassured and comforted by the statement.”

“There has been a rupture for too long” between Indians and the Church, he told a reception held by the Canadian Embassy at the Pontifical North American College, the leading seminary for U.S. priests in Rome. He said Canada’s First Nations see Kateri’s canonization “as a moment, as an opportunity for us. We accept your apology. We forgive. Now let us take this moment for healing and reconciliation. It is such an important moment.”