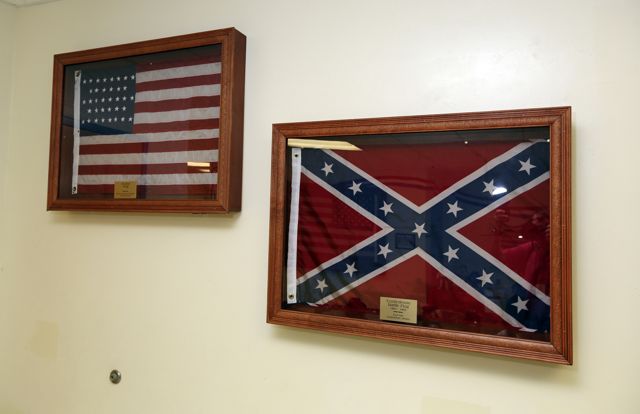 By Michael Vasquez, The Miami Herald –

MIAMI—Sunset Lakes Elementary School in Miramar is not your typical school — opened 10 years ago with a “U.S. History” theme, just about every hallway is emblazoned with historical murals, artifacts, or flags.

Does that make it OK to display the Confederate flag?

The school’s principal, Marc Charpentier, thinks so. But Sunset Lakes has received multiple complaints from parents over the years, and the latest parent to complain, 38-year-old Tina Meadows, isn’t backing down.

“I tried to ignore it, but it really nagged at me, and bothered me,” said Meadows, who is black. “It has no place in a public school, especially an elementary school.”

Meadows said she saw the flag on the first day of school, as she escorted her 5-year-old son, Mark, to his first day in kindergarten. For weeks, she said, she struggled with her feelings about it — even shedding tears over it — before finally deciding to complain.

But Charpentier is inclined to keep the flag, which he says is displayed purely because of its historical significance, and is in no way endorsed or promoted by the school. The principal said he might reconsider if there was a groundswell of community opposition, but he hasn’t encountered that, and the school’s diverse staff doesn’t seem upset either.

“They understand the context in which it’s being represented,” Charpentier said. “We’re not saying ‘This is the only flag of the building,’ that’s not the message that’s being sent.”

In that letter, sent this week, Airaghi defended the flag, stating that in accordance with “sound educational practice” the school was recognizing all aspects of U.S. history, “including those that are difficult and repugnant.”

Meadows hasn’t given up, and an online petition she started at Change.org has garnered nearly 4,500 signatures calling for the flag to be taken down.

“The Confederate flag is equivalent to the use of the swastika in Nazi Germany,” wrote petition signer Celeste Barnette, of Newmarket, N.H.. “Why would anyone need to take pride in it except to exhibit hatred and intimidation?”

Although some who embrace the Confederate flag say they do so without racial overtones (instead seeing it as an homage to Southern heritage and regional pride), the symbol’s close connection with the South’s history of slavery makes it an inflammatory issue. The flag has also been embraced by hate groups such as the KKK, and the mere sight of the flag is enough to make some people feel angry or afraid.

Schools across the country have harshly disciplined students who arrive wearing clothes containing the Confederate flag. At a Tampa Bay-area high school in August, a fight broke out among four students after one brought the flag to school.

Even groups with a deep Southern identity — rock band Lynyrd Skynyrd and NASCAR among them — have distanced themselves from the flag more recently.

At Sunset Lakes, the flag hangs with several other historical flags in the wide entrance hallway of the school, a few steps from the main office. The old flags are encased and dated. Next to the Confederate Battle Flag is a 36-star Union flag that was flown during the last year of the Civil War.

There’s also a 1814 flag, a Grand Union Flag from 1775-77, and a less recognizable “Stars & Bars” Confederate flag from 1861, among others. Three much larger, more current American flags also hang in the hallways — one that was flown from the U.S. Capitol building, another emblazoned with the names of Sept. 11 victims, and a third that was flown from a Blackhawk helicopter fighting in Iraq in 2008.

Meadows says the Confederate flag belongs in a museum, not a school. But school officials respond that Sunset Lakes was designed to be a sort of mini-museum, and as such, the country’s difficult and even awful moments in time deserve a spot on its walls.

“We have to learn from history’s mistakes,” Charpentier said. “That’s the only way that we’re going to grow as a nation.”

Sunset Lakes’ unique design was the brainchild of former Principal Linda McDaniel, who retired about a year and a half ago. McDaniel said she received a couple of parent complaints about the Confederate flag over the years, but those parents settled down after she explained the school’s U.S. history focus.

Some of the historical murals at Sunset Lakes are playful, such as a “Life in the 1980s” painting that features Cabbage Patch dolls, a Miami Vice logo, and the faces of E.T. and Superman.

Others are more solemn. A Sept. 11 mural shows the two World Trade Center towers with smoke billowing out, and a second plane about to make impact. A “Holocaust in Europe” mural shows a Nazi soldier pointing a gun at a little boy.

“I had friends’ parents that were in the Holocaust,” said Hope Leonard, an Exceptional Student Education specialist at Sunset Lakes who is Jewish. “When I walk by, I feel sad, but I understand the concept … this is a teaching tool for every student in the school.”

How would she feel if that mural contained a swastika?

“I open up a history book and I see a swastika,” Leonard said. “I don’t like it, but it’s part of history.”