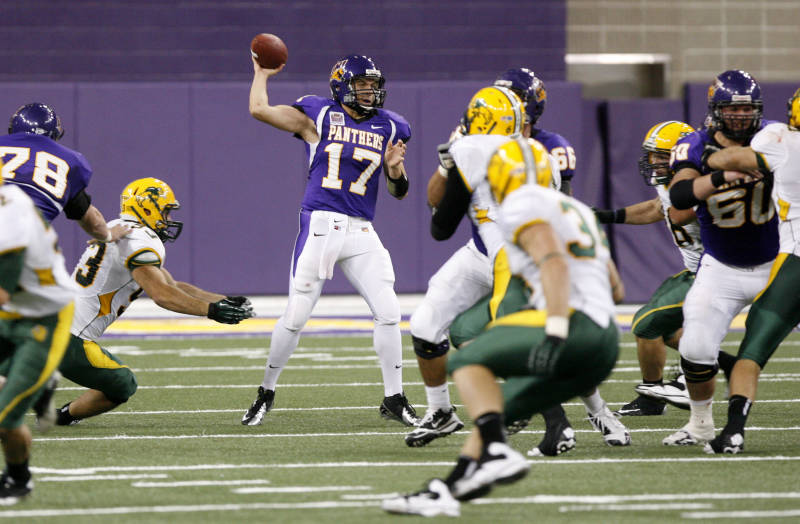 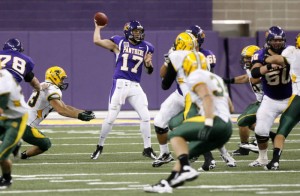 Redshirt freshman Sawyer Kollmorgen finished with 243 yards and went 18-for-27 passing. David Johnson led the Panthers on the ground with a season-high 118 rushing yards and Brett LeMaster finished with a team-high 112 yards receiving.

The Salukis struck first with 12:04 left in the first quarter when the Saluki quarterback ran for a 49-yard touchdown. The drive ate up 2:56 off the clock for six plays and 75 yards.

After the Salukis’s touchdown, Varmah Sonie was able to block the extra point for his first block of the season. Carlos Anderson opened up the field with a 31-yard kickoff return to put the Panthers on their own 42-yard-line.

Johnson notched a 51-yard rush on the second play of the drive to put UNI on the Saluki five-yard-line. Anderson snuck into the end zone on the next play to give the Panthers the 7-6 lead with 11:01 left in the first quarter.

The UNI defense came up with a forced fumble by Xavier Williams which was recovered by Sonie with 6:34 left in the first quarter. Terrell Sinkfield and Kollmorgen were in sync in the second UNI drive of the game linking up for two first downs and 17 yards.

On the same drive, Johnson scored his ninth touchdown of the season giving the Panthers a 14-6 lead with 1:17 remaining in the first quarter. UNI knocked 5:21 off the clock for 13 plays and 72 yards.

To open the second quarter, Kollmorgen and Chad Owens had a nice pass-and-catch play for 12 yards and a UNI first down. Unfortunately, the Panther offense turned the ball over giving the Salukis the ball on the SIU 32-yard-line.

On a crucial third down for the Salukis with 11:53 left in the second quarter, Jake Farley made a stop by deflecting a pass to the Saluki receiver. SIU was forced to punt, giving UNI the ball on its own 14-yard-line.

On the next drive for the Panthers, Brett LeMaster scored his second touchdown of the season on a 76-yard pass from Kollmorgen. The drive was only three plays for 86 yards and knocked off 1:17 from the clock giving UNI a 21-6 lead with 10:36 left in the second quarter.

Williams notched his first quarterback sack of the season forcing SIU to a quick three-and-out with 9:11 left in the half. SIU’s punt gave the Panthers good field position on the UNI 38-yard-line.

The Salukis cut the Panther lead to eight points when SIU blocked a UNI punt and recovered it in the end zone to cut the lead to 21-13 with 7:40 left in the second quarter.

UNI recovered another fumble late in the half with Sam Tim notching his first fumble recovery of the season. The Panthers took over possession with 3:27 left in the second quarter on the SIU 48-yard-line.

On a third down, Owens and Kollmorgen hooked up again for a 33-yard gain putting UNI in scoring territory.

The game swung on a turnover by Johnson as he fumbled into the endzone and SIU’s Bryan Presume scooped it up and rambled 100 yards for a touchdown. The Salukis converted the two-point conversion to knot the game at 21-21 with 1:06 left in the half.

Kollmorgen finished the half 10 for 13 passing with one touchdown. Johnson led the Panthers on the ground with 82 yards on 12 carries and LeMaster led UNI in the air with 81 yards and a touchdown. Garrett Scott finished the half with seven tackles and Jordan Gacke was close behind with six.

In the third quarter, Carlos Anderson broke free for a 38-yard gain, giving him his longest rush of the season and putting the Panthers on the SIU 40-yard-line. The Salukis forced the Panthers to punt however, keeping the score tied 21-21 with 9:26 left in the quarter.

To open the fourth quarter, Johnson scored his second touchdown of the game to cut the SIU lead to 31-28 with 13:40 left in the game. Johnson’s 29-yard rush for the score was the ending on an 11-play, 75-yard drive.

On the next SIU drive, the UNI defense forced the Salukis to punt, giving the Panthers the ball on the UNI 47-yard-line. After a solid drive, the Panthers tied up the game 31-31 with a field goal from Tyler Sievertsen with 9:54 left in the fourth quarter.

UNI’s Wes Smith returned the ensuing kickoff 43 yards to the 46-yard line and the Salukis were flagged for a personal foul – giving UNI the ball on the Saluki 39-yard line with 50 seconds left in the game. However, UNI could not move the ball and turned the ball over on downs.

The Panthers will return to action Sat. Oct. 20 when they host South Dakota State for UNI Homecoming. The game is set to kick-off at 4:00 p.m.