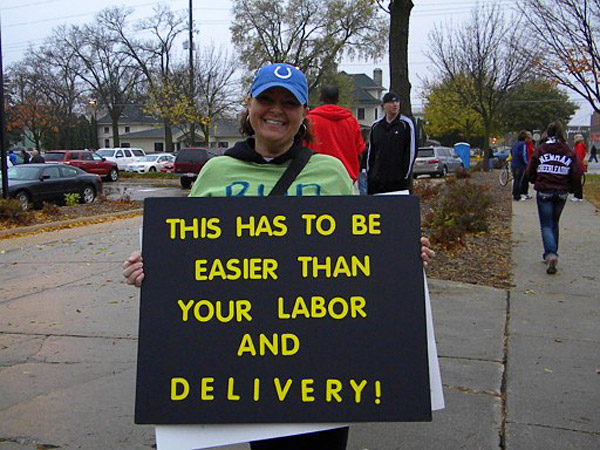 Gary Schmit, Race Director, said, “We have 94 full marathon runners, and also 4 Corporate.  There will be 68 half-marathon runners starting at 9:00.  It is a Newman sponsored race and a Boston Marathon Qualifier.”

“We will ride with runners the whole race,” informed O’Brien, “because they’d do it for us.”

The Announcements and prayer was done by Schmit and the National Anthem was sung by Lindsay Schmidt.

“Lindsay has a couple students running in the marathon,” said Schmit.

At 8:00 sharp, the gun was shot and the runners were off.  It was reported that runners were coming off of Thrush Avenue and on to B20, heading to Lime Creek at 9:14 am.

When the race started, Jill Boisjolie, who has a son, Alex, running in the full marathon, was putting her encouraging sign away and heading to her next destination.  “It’s his first marathon.  I have six different signs to use throughout the route, but I like this one the best,” she said with a smile and a little giggle.   She was also wearing a personalized t-shirt showing how proud she is of her son.

All of the races will be ending at the Newman Catholic School parking lot later this afternoon.

Results will be posted as they are made available.