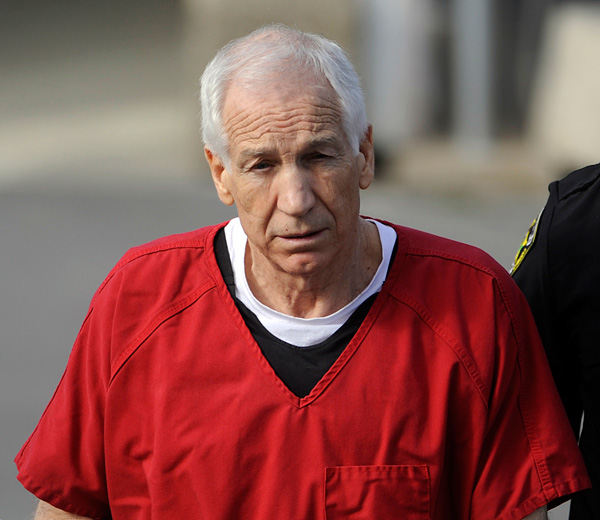 BELLEFONTE, Pa. — Three of the 10 known victims stood up and spoke at the sentencing hearing, and a fourth had his statement read into the record.

More tears were shed, more light shone onto their unspeakable burdens. They spoke, the attorneys spoke, and then it was just the two of them, directly facing each other:

Jerry Sandusky, in a red prison uniform, standing at a lectern. And John Cleland, wearing a black robe, seated behind the judge’s bench.

It had come to this. The trial had been a horror, and included a behind-the-scenes abomination never told to the jury: one of Sandusky’s six adopted children approached prosecutors in the middle of the proceedings to claim that he, too, was one of his father’s victims. It had been a national spectacle, with the former Penn State defensive coordinator at the center of a swirl of events that resulted in the firing of legendary coach Joe Paterno, as well as university president Graham Spanier.

To this day, there are university administrators facing charges of perjury and a mountain of potential civil lawsuits looming. This story has chapters yet to be written. But amid all that swirl, and in a filled courtroom, the focus eventually turned to two men, and only two.

Sandusky was rambling and bizarre.

Cleland was eloquent and reasoned.

Sandusky said that he had done many good works.

Cleland said that he understood.

“So it is perhaps the ultimate tragedy of this situation that all the qualities that made you so successful … continued to conceal the very vices that led to your downfall,” the judge said, adding that it is Sandusky’s very ability to conceal those vices that, “in my view, makes you dangerous.”

And then he sentenced the 68-year-old to what is effectively a life term: a minimum of 30 years and a maximum of 60 years.

Sandusky spoke for about 15 minutes. He began to cry once, near the end, when he spoke about missing his family while in prison. The rest, though, was part denial and part narcissistic journey.

He spoke about spending his 46th wedding anniversary in jail and banging his head on the cinder-block wall and crying when he realized that he could not hug his wife, Dottie. He said, “I told Dottie that day, ‘We’re definitely in the fourth quarter.’ You find out who’s committed, who will stand by you, who will go through the hurt and pain to get you where you want to go. Her and others are standing strong. I like to believe they know me the most.”

He talked about his jail cell. He said, “There’s a lot of darkness in that room. I think about not being with her, not being there for my children, not being there to see my grandchildren mature, not seeing my dog.”

He mentioned the dog more than once.

But Sandusky also said, “I see great memories. I see loved ones carrying the light. I see family and friends … I see the people who have stood by me … I see me throwing thousands of kids in the air and hundreds of water-balloon battles. Happy times.”

If that one sentence did not give you a shiver, you were not there to witness the trial testimony of the victims, all of them from difficult family situations, all of them groomed and then exploited.

Later, attorney Joseph Amendola said that he had persuaded Sandusky to remove from the statement an attempt to question the victims’ motives for fear of the judge cutting him off. Sandusky had done just that in a radio interview released on Monday, including alleging a conspiracy to convict him involving the media and the justice system.

Cleland listened, stone-faced. When Sandusky was done, he shuffled a few papers, getting them in just the right order, and then he proceeded. Sandusky again stood at the lectern, with Amendola at his side.

While Sandusky wallowed in his own pity, the judge showed repeated sensitivity to the victims. He said, “It is this remarkable ability to deceive that makes these crimes so heinous.”

And: “The tragedy of this crime is that it is a story of betrayal.”

And: “Some have had their innocence taken.”

And then, addressing the victims directly, Cleland said: “The fact that you were assaulted is no cause for embarrassment or for shame. As children you were the victims of a pedophile … His conduct was no fault of your own. As adults, you have now come forward to hold him accountable. It is for your courage and not for your assault that you will be remembered … “

With that, the business of the day was to be done.

“I’m not going to sentence you to centuries in prison,” Cleland said. Sandusky could have been sentenced to more than 400 years in jail. But the judge chose not to.

He said that “it’s only a big number” and that he preferred something more understandable, more real, less abstract, something that the 68-year-old former Penn State football coach would comprehend completely.

Cleland said that he wanted a number that said, effectively and clearly, “for the rest of your life.”

And it was done.