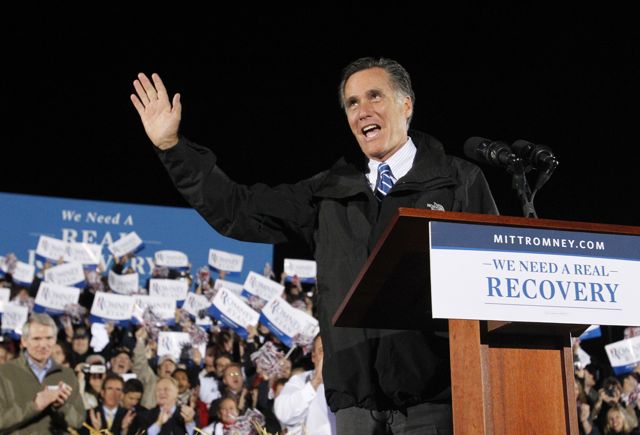 CUYAHOGA FALLS, Ohio —:The scene outside the Natatorium in Cuyahoga Falls resembled a carnival in the hours before Republican presidential candidate Mitt Romney arrived for his Tuesday night campaign stop.

By 3:30 p.m., hundreds of people had already lined up to get into the rally. By 5 p.m., the crowd swelled to thousands.

The party faithful formed two lines starting just a few feet from the corner of Fourth Street and Oakwood Avenue, stretching down Oakwood to Third Street.

Janell Boswell of Macedonia was at the front. She arrived at 2:30 p.m. for Romney’s 8 p.m. appearance.

“He needs our support to take care of what’s in our White House right now,” she said. “We need someone who knows about business, not this Hollywood movie star.”

Terry Brennan of Wellington and Mary Kirchner of Westlake also waited near the front of the line.

“Maybe the most important in my lifetime,” Brennan said.

Those in line were joined by roaming vendors peddling campaign-related merchandise including buttons with slogans like “Hot chicks vote Republican,” T-shirts and even oven mitts with a picture of Romney with the slogan “Don’t get burned.”

He said a percentage of the profits go to the Romney campaign. Shepherd entertained the crowd with his sales pitch.

“You look underdressed,” Shepherd shouted to the crowd. “You need a button. Three for $10.”

The first protester arrived around 4:30 p.m. He walked up and down Oakwood Avenue carrying a sign that read “Mitt Romney is a liar.”

Romney supporters jeered and booed then applauded as a police officer escorted the protester away from those waiting in line.

Someone dressed like Big Bird arrived next with a few non-Muppet friends, carrying signs that read, “Regulate Wall Street, not Sesame Street.”

They were soon joined by two members of a local stagehand union carrying signs that read “Romney didn’t use union labor for this rally” and “Even Bush used union labor.”

Cuyahoga Falls High School student Logan Bleys, 15, was among the protesters. He said he is a union supporter.

Some Romney supporters shouted that Bleys and other teens had been brainwashed.

“I think it’s important for either side to voice an opinion,” Bleys said. “Some of the same people who make fun of us protest at Democratic rallies.”

His foray into the political arena was short lived and ended with a phone call from home.

“It was my dad,” Bleys said as he handed his protest sign to others. “I have to go home for dinner.”

Among the protesters was Shane May, who opposes Romney’s stance against same-sex marriage. He and his partner, Coty May, unsuccessfully challenged the city’s policy to not recognize same-sex partners as being eligible for its discount rate for married couples at the Natatorium.

The two men were married in Washington, D.C., last October, but Ohio does not recognize same-sex marriage.

Carolyn Budgett of Cuyahoga Falls sat in a wheelchair being pushed by Bob Kline of Barberton. She was not swayed by the protesters.

This was Budgett’s second political rally. Her first was in 2004 in the same spot where she heard President George W. Bush speak.

“I wasn’t in a wheelchair then,” she said.

She was just excited to see Romney.

“Romney is honest. He’s a statesman,” she said. “I think he’s good for our future.”