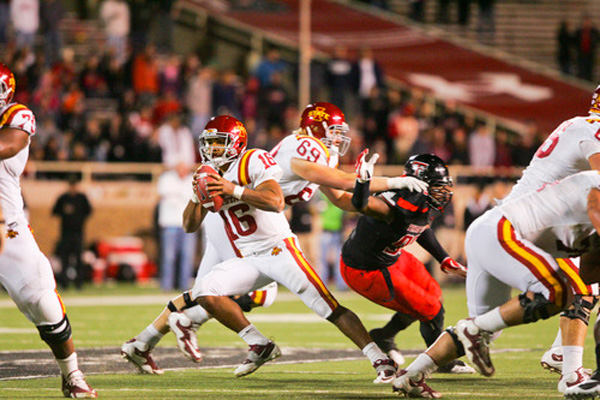 From the Iowa State Athletic Department –

The Cyclones and Buckeyes are the only schools in Division 1A football, who have defeated a nationally ranked opponent on the road in each of the last three seasons.

The exclamation point is that the Cyclones are the only program in the nation that did it each time as a severe underdog and as an unranked team!

Read that again, and let it sink in. Among the 118 FBS schools, Iowa State stands alone as the only school nationally to defeat ranked teams on the road – playing as an underdog – in three straight years (2010, 2011 and 2012).

Alabama and LSU have both defeated four ranked teams away from home for the same period. Three of those wins for the Crimson Tide and Tigers, however, came in the 2011 season when they met for the national championship. Additionally, Alabama and LSU were the higher rated school in each of their triumphs.

The only other schools in the nation with three victories over ranked teams on the road during that time frame are Virginia Tech (one win in 2011 and two in 2010) and Oklahoma (two in 2011 and one in 2010).

Breathe that rarified air Cyclones. You earned it.