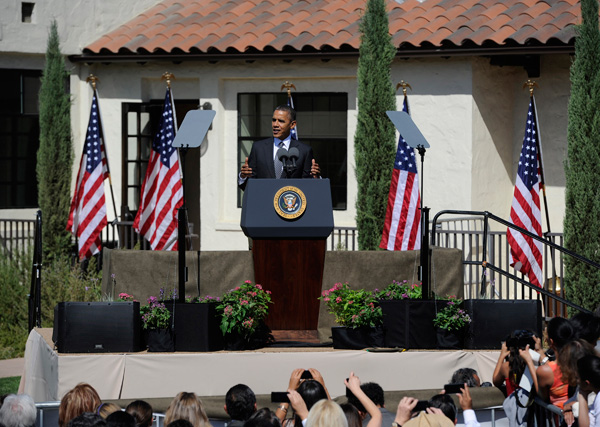 KEENE, Calif. — President Barack Obama’s stop in this remote and sparsely populated San Joaquin Valley town was about as far off the campaign trail as a candidate could be so close to an election. But his message as he dedicated the Cesar E. Chavez National Monument was not without political significance, as he honored the legacy of a civil rights and labor leader whose “si se puede” credo was an inspiration for his own historic campaign four years ago.

Speaking on the 187-acre property that served as both home and operational headquarters for Chavez and his United Farm Workers movement, Obama said Chavez’s tenacity on behalf of a new generation of workers was part of “the story of who we are as Americans,” meriting such a tribute alongside other national monuments like the Statue of Liberty and the Grand Canyon.

“It’s a story of natural wonders and modern marvels, of fierce battles and quiet progress. But it’s also a story of people, of determined, fearless, hopeful people who have always been willing to devote their lives to making this country a little more just and a little more free,” Obama said.

Monday’s event was the sole official stop on a three-day, campaign-heavy trip, sandwiched between fundraising stops in Los Angeles and San Francisco. The designation means that taxpayers fund a portion of the president’s travel, while his campaign pays costs associated with his political travel.

Even without the banners reading “Forward,” his 2012 re-election slogan, and Marine band anthems replacing the usual campaign soundtrack, the electoral significance was clear.

Arturo S. Rodriguez, the current president of the United Farm Workers, noted in his introduction of the president that Obama adopted Chavez’s “belief in ‘Si se puede,’ as his own 2008 campaign credo, ‘Yes we can.’

“And when he was elected, he used his power to say yes,” Rodriguez said, before listing the appointment of Latino Cabinet secretaries (both of whom attended Monday’s event), a first Latina Supreme Court justice, and his support for a deferred action program that allows young undocumented workers to remain in the United States.

With time an increasingly precious commodity in a race that has shown new volatility after a long period of stasis, Obama is leaning on all the levers available to him for an advantage, including perhaps his biggest weapon: incumbency.

The dedication of the Cesar Chavez National Monument came not through legislative action but executive authority under the Antiquities Act. Though White House officials said it was a process long in the making, the formal dedication came as Obama’s campaign shifts toward a more intensive get-out-the-vote phase of its operation, one that includes a major focus on the Latino vote and will be augmented by labor muscle.

Los Angeles Mayor Antonio Villaraigosa, who attended the dedication and is also a national campaign co-chairman for the president’s re-election effort, said it was a fitting moment because of how Obama fits into Chavez’s legacy.

Obama, who admitted Sunday that his performance in last week’s debate was lacking, said in his remarks Monday that the nation could draw inspiration from one particular facet of Chavez’s decades of advocacy for farm workers.

Chavez “worked for 20 years as an organizer without a single major victory,” the president said. “But he refused to give up. He refused to scale back his dreams. He just kept fasting and marching and speaking out, confident that his day would come.”

A week ago, National Park Service officials figured about 4,000 people would attend the dedication. The official attendance Monday was 6,600, even after about 1,000 people saw their invitations rescinded by the UFW and Chavez foundation amid concerns about overbooking.

Among those turned down was Maricela Mares-Alatorre, a community activist from Kettleman City, an impoverished farming community north of Bakersfield where locals suspect a local toxic waste dump is the cause of severe birth defects.

“We were uninvited Sunday night,” said Mares-Alatorre, who had planned to accompany 13 other Kettleman City residents including her father, a farm worker who marched in Chavez’s funeral procession in 1993. “They said they were overbooked. We’re heartbroken.”

Obama quickly departed Keene to travel to the San Francisco Bay Area for three fundraisers Monday evening. He closes the trip Tuesday with a rally at Ohio State University timed to coincide with the state’s voter registration deadline.